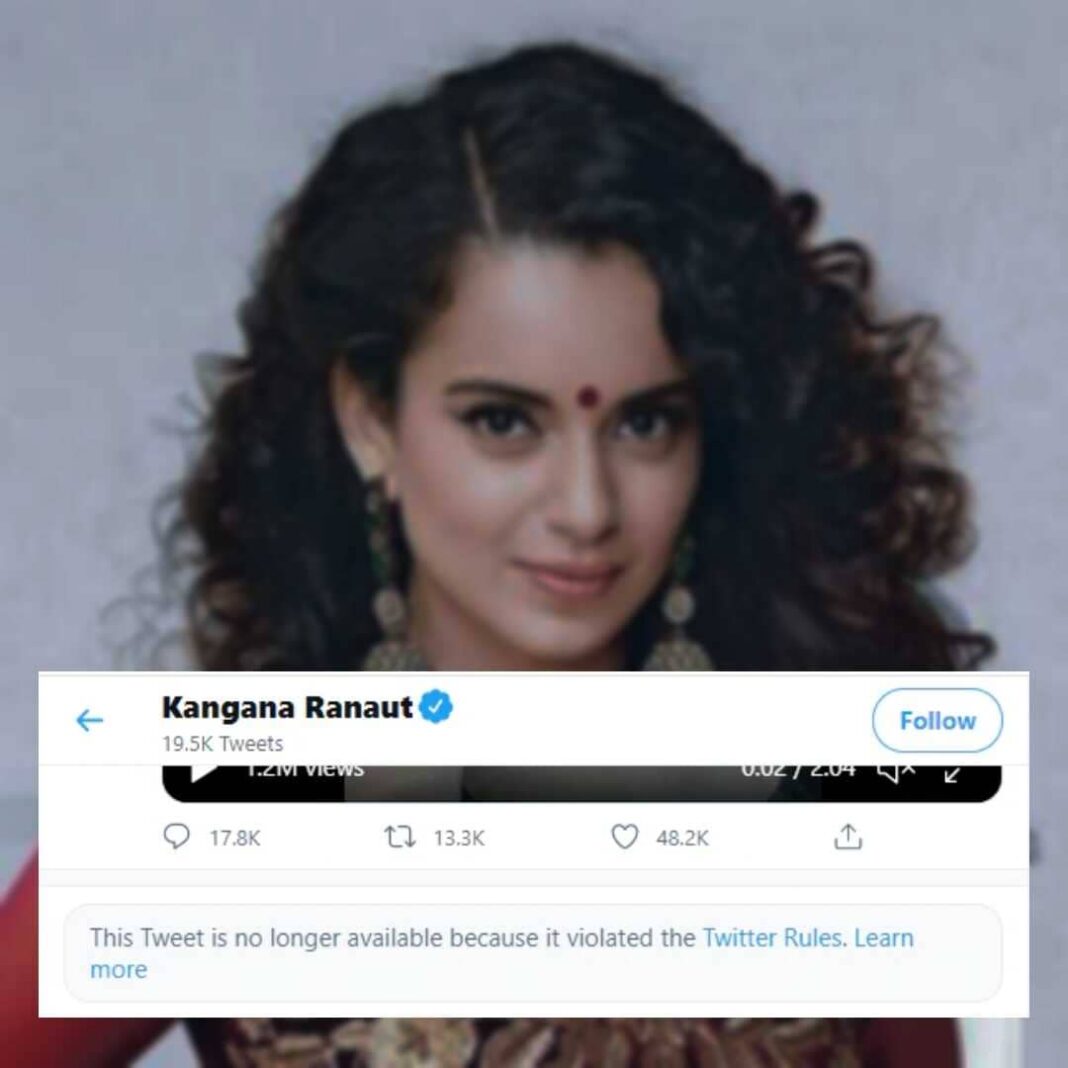 India, Feb 4: Twitter has stated after taking down two of Kangana Ranaut’s tweets over violation of their guidelines. In their statement, they have said that the action was taken as the tweets were in ‘violation of Twitter rules‘. The move of removing Kangana’s tweets comes a day after the actress went on a virtual rampage against pop star Rihanna, who showed her support for the farmers’ protest.

The statement issued by Twitter reads, “We have taken action on Tweets that violated the Twitter Rules in line with our range of enforcement options.”

On Thursday (February 4), Twitter took down two tweets by Kangana Ranaut after she tweeted about international star Rihanna’s support on the ongoing farmers’ protest. Kangana also made headlines after she referred to the farmers as ‘terrorists‘. This led to several Twitter users reporting Kangana’s account, asking for it to be banned.

Kangana had also called singer-actor Diljit Dosanjh a ‘Khalistani‘ and engaged in a war of words with him on Twitter.

It all started when Diljit released his latest song titled Riri. The song is dedicated to Rihanna, and heaps praise on her.

Reacting to Diljit’s song announcement, Kangana had accused the singer-actor of trying to profit from the situation. She wrote, “Reacting to Diljit’s tweet that announced his new song Riri, Kangana wrote, “Isko bhi apne 2 rupees Banane hai, yeh sab kabse plan ho raha hai? One month toh minimum lagega to prep for video and announcement, and libru want us to believe it’s all organic haha #Indiatogether #IndiaAgainstPropoganda (He also wants to make some money. Since when were you planning this? It would have taken at least one month to prepare for the video and the announcement).”

Diljit hit back at Kangana which led to a war of words between the two. He wrote, “2 Rupees. Apne Wali Job Mainu Na Das.. Gana Tan half An Hour Ch Bana Lene An Asi.. Tere te Banaun Nu Jee Ni Karda Mint tan 2 Hee Lagne an.. HAR JAGHA TU BOLNA HUNDA.. Ja Yaar Bore Na Kar .. Kam Kar Apna.. ( 2 Rupees. Don’t tell me about your job. it takes a half-hour for me to create a song. I just don’t feel like making a song on you else it would take only 2 minutes. You have to speak everywhere. Please go away and don’t bore me. Do you work).”

In his final tweet, Diljit had written that he will no longer respond to Kangana Ranaut’s tweets as she likes to indulge in Twitter wars.