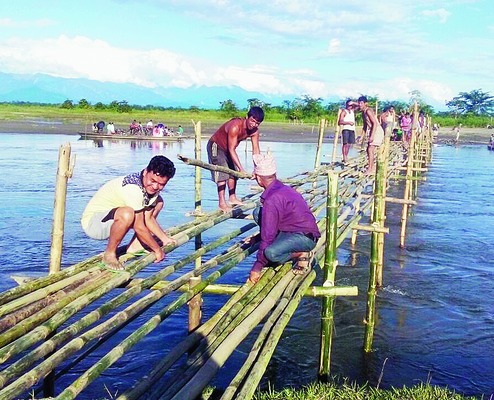 Guwahati, July 5: The people of 10 villages of Kachumara area in Assam Barpeta district have finally fulfilled their dreams by constructing a bridge by spending their own money.

Without any support from the government, the villagers built a bamboo bridge on a tributary river of Brahmaputra river with their own money.

The villagers spent about Rs 10 lakh to construct the bridge.

The bridge is about 250 meters long that connecting to Kachumara bazaar area.

The people of 10 villages of the area were facing lot of problems, difficulties for not having a bridge on the river.

Crossing the river during monsoon season was an uphill task for the villagers since the past several decades.

The task was more challenging when the children were forced to cross the river by using country made small boats to reach their schools.

The villagers appealed the state government and local MLA several occasions to construct a bridge on the river, but the government or the MLA didn’t respond.

The villagers had used country made boats to carry patients, food items since the past several decades.

Finally, 6000 people living in 10 villagers had decided to construct a bridge on the river by spending their own money.

Some local youths had taken the initiative and collected money and other items from the villagers for bridge construction.

On Saturday, the bamboo bridge was formally inaugurated and the villagers had celebrated.

A local youth said that, each family of the area had contributed to construct the bridge.