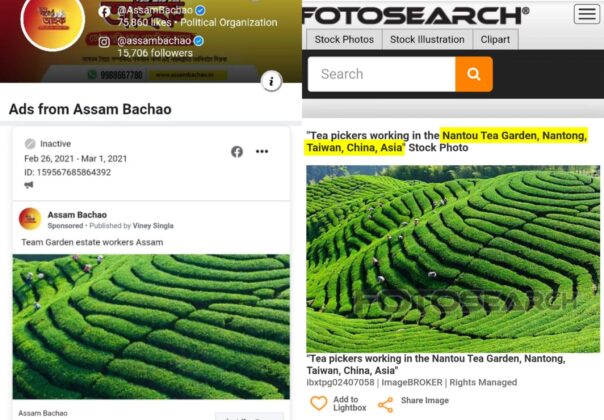 This is an insult of Assam and Tea Garden workers of our state. #CongressInsultsAssam pic.twitter.com/UTS7iSROu2

On Tuesday, Congress leader Priyanka Gandhi Vadra visited tea gardens in Assam, interacted with the workers and went to their huts, and posed for photographs.

To bolster the symbolism, one of the photographs showed her plucking tea leaves with a basket held with a strap over her head like the women workers traditionally do.

Later in the afternoon, one of the five promises Priyanka announced, if Congress comes to power, was increasing the per day wage of tea garden workers to Rs 365.

The announcement came on the heels of continuous political rhetoric by leaders of both the BJP and the Congress regarding Assam tea and tea garden workers, their quality of life and their wages.

Who are the tea garden workers in Assam?

Assam accounts for over half of India’s total tea production. Tea garden workers were brought by the British from states like Orissa, Madhya Pradesh, Bihar, Andhra Pradesh and West Bengal afterwards of 1860.

Till today it is marked by exploitation, economic backwardness, poor health conditions and low literacy rates.

At a public event in Assam on February 7, Prime Minister Narendra Modi said that no one could appreciate the special taste of Assam tea more than him.

He said he always considered the development of Assam and Assam’s tea garden workers together and that there was an international “conspiracy” against Assam tea.

The “conspiracy” that he mentioned is assumed to be a veiled reference to a ‘toolkit’ shared by environmental activist Greta Thunberg wherein it was said that India yoga and chai’ image should be disrupted as one of the steps taken against the contentious farm laws.

What is their political significance?

The tea tribe community — comprising 17 per cent of the state’s population — is a deciding factor in almost 40 Assam assembly seats out of the 126.

The community is spread over 800 tea gardens plus several unorganised small gardens of Assam — living mostly in residential quarters adjacent to gardens.

The community is one of the most marginalised in Assam but is also a large vote bank. The BJP has a strong voter base in the community now, overcoming an earlier Congress stronghold.

Both organisational penetration within the community and reaping the benefits of welfare schemes have benefitted the saffron party.

In the 2019 Lok Sabha polls, the BJP won the two seats — Rameshwar Teli from the Dibrugarh seat and Pallab Lochan Das from Tezpur — wherein the tea garden workers are a dominant electoral force.

Both Teli and Das belong to the garden workers’ community. Teli is an MoS in the Centre now.

What is the issue of the per day wage of tea garden workers?

Increasing wages of tea garden workers has been a major demand of the community and poll plank. Although the tea garden managements pay the wages, the government fixes it.

In 2017, the Assam government formed an advisory board to fix the minimum wages of tea workers — the board recommended an amount of Rs 351.

The next year, as an interim measure, the Assam government hiked daily wages Rs 137 to Rs 167.

Last month, in what was seen as a step taken keeping in view the elections, the Assam government increased the wages of tea garden workers from Rs 167 to Rs 217.

Tea gardens workers’ bodies have already expressed their dissatisfaction with the hike, which they consider inadequate.