Home Top News TMC calls out the BJP government for silence on the Hathras gang... 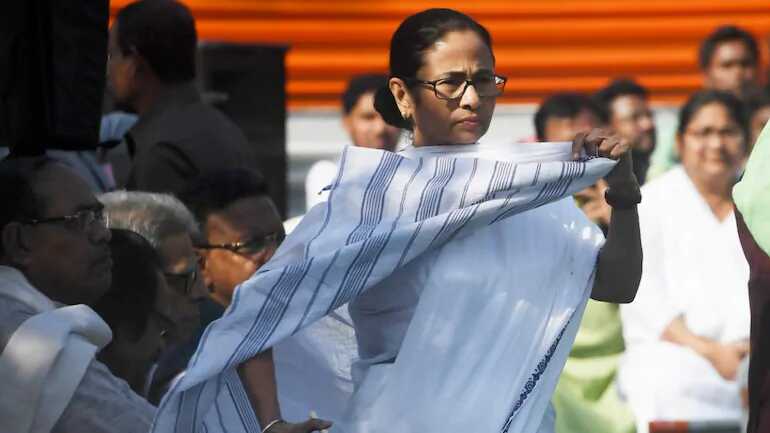 Uttar Pradesh, October 2: After Rahul Gandhi, TMC leaders were manhandled by the UP Police, on trying to enter Hathras district. Yesterday, Congress scions Rahul Gandhi and Priyanka Gandhi Vadra were detained by the UP police when they tried to enter Hathras. Section 144 of the CrPC is imposed in the area to maintain law and order. Today, Trinamool Congress leaders, including Rajya Sabha MP Derek O’Brien were stopped at the border when they were on their way to meet the rape victim’s family.

This video shows the UP police aggressively stopping the TMC leaders

#WATCH: TMC delegation being roughed up by Uttar Pradesh Police at #Hathras border. The delegation, including Derek O'Brien, was on the way to meet the family of the victim of Hathras incident. pic.twitter.com/94QcSMiB2k

TMC’s Mamata Thakur accused the UP police of inappropriate behaviour with the female leaders as well. She said that the female police officers pulled their blouses and a male cop touched their MP Pratima Mondal.

#WATCH We were going to meet her family but there were not allowing us. When we insisted, the women Police personnel pulled at our blouses and lathi-charged at our MP Pratima Mondal. She fell down. The male Police officers touched her. This is shameful: Mamata Thakur, TMC https://t.co/404nqZhjl5 pic.twitter.com/Nxc9SLeMWY

Mondal said that they are sent by the Chief Minister of West Bengal, Mamata Banerjee, to meet the family.

TMC hit out at the crime against women in Uttar Pradesh. The Trinamool Congress attacked Prime Minister Narendra Modi for remaining silent on the gangrape incident at Hathras in the BJP-ruled state of Uttar Pradesh and said that he should also speak up for Dalits.

An unspeakable crime committed in #Hathras under @narendramodi ji’s reign & he was silent. The girl succumbed to her injuries, after battling to stay alive for 15 days & now, @Uppolice has utterly disrespected her remains!#ModiSpeakUp4Dalits if you have any humanity left inside. https://t.co/BqWElBsfXr

Mamata Banerjee tweeted, “Have no words to condemn the barbaric and shameful incident at Hathras involving a young Dalit girl. My deepest condolences to the family. More shameful is the forceful cremation without the family’s presence or consent, exposing those who use slogans and lofty promises for votes.”

Have no words to condemn the barbaric & shameful incident at Hathras involving a young Dalit girl. My deepest condolences to the family.
More shameful is the forceful cremation without the family’s presence or consent, exposing those who use slogans & lofty promises for votes.

On the other hand, Prime Minister Narendra Modi spoke to UP Chief Minister Yogi Adityanath after the outrage on the incident. Adityanath on Wednesday constituted a three-member SIT to probe the gang-rape case, a day after the death of the 19-year-old woman in a Delhi hospital and also asked for conducting the trial in a fast track court. The Chief Minister’s office tweeted, “Respected Prime Minister @narendramodi Ji has spoken on the Hathras incident and said that strict action should be taken against the culprits.”

The 19-year-old Dalit girl was gang-raped by four upper-caste men in Hathras district of Uttar Pradesh. She was grievously injured to an extent where her spine was broken and her tongue cut off. The incident took place on September 14. She battled for her life for 15 days and then dies in a Delhi hospital on Tuesday, September 29. Her body was brought to their village around midnight and the police burnt the body without the family’s permission. The family members were locked inside their homes and were not allowed to see her for the last time. The police even beat the family members and villagers who protested. The death and unjust cremation of the girl has led to widespread outrage all over the country. The opposition parties of the state have condemned the incident. Not only did the attackers commit a heinous crime, but the legal authorities, in this case, have also mistreated the victim’s family with indignity.

Dalit politician and activist Chandrashekhar Azad visited the victim at the hospital. His party has called for a nationwide protest over her death. Mayawati, former UP Chief Minister and Dalit politician tweeted, “the government should provide all possible help to the victim’s family and ensure speedy punishment to the culprits by prosecuting them in a fast-track court.”

Recently, the UP police have stated that according to the forensic report, no traces of semen were found, hence proving that the girl wasn’t rape.