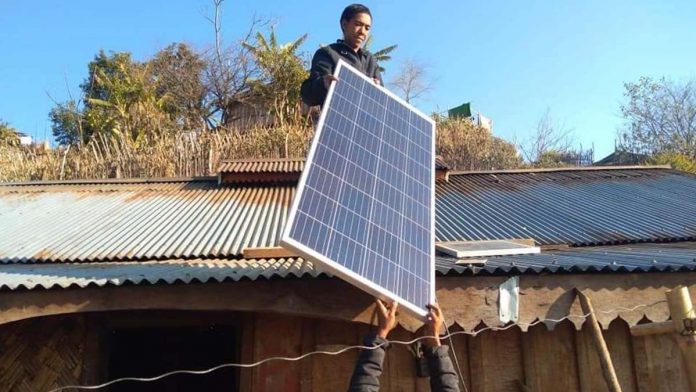 Nagaland, Feb 20: The bamboo torch was the source of light after dusk in Shinnyu for almost 44 years after it was set up close to the border with Myanmar.

The last of these torches were lit on February 15, the day before solar-powered bulbs lit up the village of 60 families belonging to the Konyak Naga community.

Shinnyu would probably have been in darkness for some more time had not John Khangnyu, the headmaster of the government-run village school lamented the lack of electricity on social media.

Khangnyu is from Tobu, the nearest connected settlement about 58 km from Shinnyu. He is one of the few people in Shinnyu to own a mobile phone because recharging the battery involves travel of several kilometers.

The nearest village, Yongkhao, is 25 km away towards Tobu, which is about six hours drive from district headquarters Mon.

“We took 16 hours to travel from Mon to Shinnyu with solar panels and accessories. We came to know about the village from Brother John’s social media post on the electricity and connectivity issues in Shinnyu,” Jaideep Bansal of Global Himalayan Expedition (GHE) said.

GHE is a social impact initiative that has been working on sustainable development for remote communities since 2013. Partnering with the local administration, it has set up solar energy projects in more than 100 remote villages in Ladakh and 21 villages in the Garo Hills of Meghalaya.

Khangnyu said it wasn’t easy for him to log on. He had to come home in Tobu from Shinnyu, where he is posted as one of three teachers of the primary school catering to 74 students, to post his views on social media.

“Shinnyu was set up in 1977 and recognized by The state government in 2002 but it has virtually remained cut off in the absence of proper road infrastructure. The Power Department tried to electrify the village in 2013-14 but the project was abandoned due to logistical problems,” he said.

“We hope the installation of solar lighting will transform the lives of the community. Shinnyu was one of 10 un-electrified villages in our district. We intend to work with GHE for the other nine,” Mon district’s Deputy Commissioner Thavaseelan K. said.

GHE executed the ₹23 lakh solar project under its corporate social responsibility with the district administration taking care of the logistics. A team of 10, including engineers, set up the project.

“We are looking at support from the private sector for similar projects in other un-electrified villages in Mon, for which the district the administration has formed task groups to list priorities. Our next mission is a solar engineering workshop to train locals in maintaining the technology we have developed,” Bansal said.

Part of the agreement with the villagers, he added, is for them to open a village bank account where every household contributes ₹100 periodically for maintenance, repair, and replacement of components of the solar installation.

Khangnyu said the villagers have been enthused to go beyond their jhum (slash-and-burn) cultivation and livestock-rearing to earn some more to contribute – for the sun to continue to shine at night.