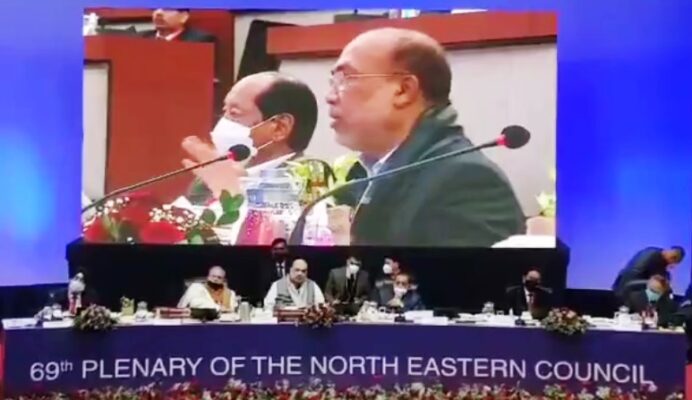 Biren was speaking in Shillong at the 69th plenary of North Eastern Council (NEC), chaired by Union home minister Amit Shah, said officials in Imphal. The meeting was attended by the governors and chief ministers of all the northeast states and MDoNER (ministry of development of northeastern region) Minister Dr Jitendra Singh and other Union ministers.

Expressing his heartfelt thankfulness to the Union home minister for his prompt assistance in controlling the fierce wildfire at Dzuko has seen recently, Biren also requested Shah to introduce a special scheme to provide poppy growers with alternative livelihood options besides approval for the Ordinance on Psychotropic Substances Amendment, which had already been forwarded to the President by the governor of Manipur.

Pressing for early completion of Jiribam-Tupul railway project and development of its main station at Imphal, he also sought assistance from the Centre in developing the Indian National Army Memorial complex at Moirang in Manipur as a world-class memorial site on the land being acquired for expansion of the present complex.

Along with fencing the undisputed stretch of Indo-Myanmar border, he also sought approval for the proposal to expand the potential areas under horticulture, submitted to DoNER ministry, for the development of value chain systems and integrated farming in shifting cultivation areas. He also requested approval to ₹126 crores five-year plan for development of Bamboo in Manipur.

Later CM Biren Singh also visited the ancient royal the property at Shillong Rajbari and made a first-hand assessment of the controversy surrounding it, as per a press release.