Deployment of heavy security personnel have been made in the tense bordering areas of Assam and Mizoram following the incident.

Police said that, the overall situation is under control and security personnel have been deployed along the bordering areas under Assam’s Cachar district and Mizoram’s Kolasib district. 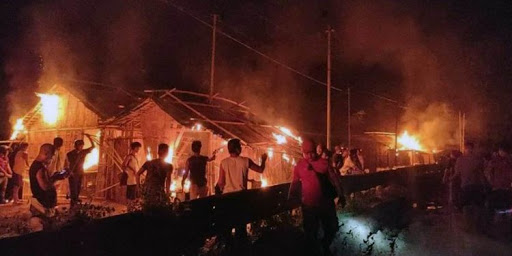 Sonowal also telephoned his Mizoram counterpart Zoramthanga and talked to him about the incident that took place at the border.

During the talk, Chief Minister Sonowal stressed on taking productive measures and joint efforts to address the border issues.

He also advocated amicably settling the border dispute and to work with cooperation for maintaining peace and law & order at the inter-state border.

Sonowal said that under the leadership of Prime Minister Narendra Modi, northeast is experiencing rapid progress on Sunday. However, to maintain the momentum, there is a need to maintain peace and boosting relations between the states.

“There might have differences but all differences must be settled through dialogue,” Sonowal said.

Reports said that, several people were injured during a clash between two groups of Assam and Mizoram broke out at Lailapur area in Assam’s Cachar district on Saturday evening.

Miscreants had torched several houses near Lailapur area along the inter-state border.