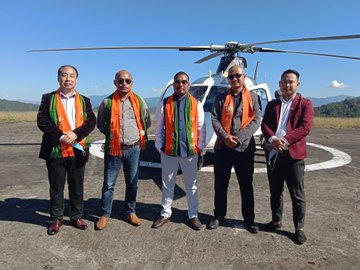 Northeast, 9th November: The ‘closed-door meeting’ between the Assam Minister Himanta Biswa Sarma and Nagaland Chief Minister Neiphiu Rio has triggered speculations about the probability of his involvement in the ‘brokering peace’ in Nagaland’s insurgency-ravaged.

The ‘closed-door meeting’ that was held with Himanta Biswa Sarma who is not only the Minister of Assam but he is also the convenor of the North East Democratic Alliance (NEDA).

The ‘closed-door meeting’ was held at the official residence of the Chief Minister of Nagaland Neiphiu Rio. The resident is in Kohima.

The ‘closed-door meeting’ was however described as a courtesy call by the Assam Minister Himanta Biswa Sarma. He also claimed that there was no serious discussion that happened at the meeting.

Though the confirmation for the ‘closed-door meeting’ was given by the officials at the Chief Minister’s office in Nagaland but the agenda of the discussion was not been made public.

The question that arises id that ‘is Himanta Biswa Sarma engaged with New Delhi to play an active role in solving the Naga political issues?’. This is because Himanta Biswa Sarma is known for his troubleshooting skill in the Northeast and therefore, people are suspecting his involvement in the Naga peace process.

The BJP government of Nagaland also tweeted about the ‘closed-door meeting’ with images.

The NSCN is in a peace mode have had several rounds of discussions with the New Delhi for a permanent solution to their political problem. The Committee of Naga National Political Groups (NNPGs) and the NSCN (IM) are involved in different conferences to find a solution to the age-old Naga problem.