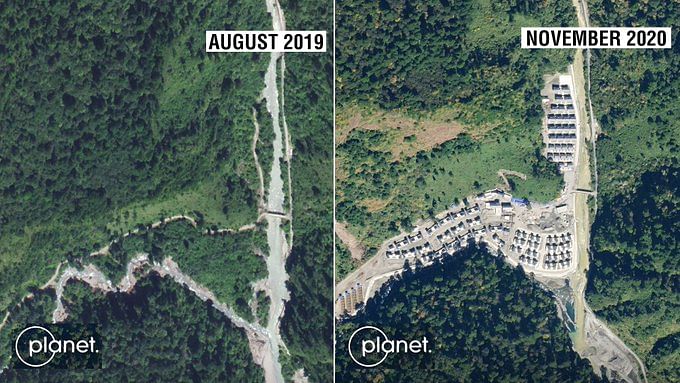 Indo-China Border, Jan 18: India on Monday responded to a report that the Chinese Government has built a village in a disputed region of Arunachal Pradesh. India said that it closely monitors all developments affecting national security and acts to safeguard territorial integrity.

The external affairs ministry said the Indian government has stepped up the construction of border infrastructure, including roads and bridges, in response to China’s “construction work along with the border areas”.

According to a media report citing satellite imagery from Planet Labs, a private US-based imaging company, China built a new village, consisting of 101 homes, in Arunachal Pradesh, about 4.5 km “within Indian territory of the de facto border.”

The village is located on the banks of Tsari Chu River in Upper Subansiri district, an area along the Line of Actual Control (LAC). Five people were detained by the Chinese troop in September from this same region.

Comparing two satellite images provided by Planet Labs, media reported the village had been built sometime in the past 15 months. The first image, from August 26, 2019, did not show any construction activity, while the second, from November 1, 2020, depicted the village with dozens of rows of small and medium-sized structures and roads.

The external affairs ministry did not address the issue of the particular village referred to in the report but said, “Government keeps a constant watch on all developments having a bearing on India’s security and takes all the necessary measures to safeguard its sovereignty and territorial integrity.”

The ministry said in a statement that India had “seen recent reports on China undertaking construction work along with the border areas”.

It added, “China has undertaken such infrastructure construction activity in the past several years. In response, our government too has stepped up border infrastructure including the construction of roads, bridges, etc, which has provided much-needed connectivity to the local population along the border.”

The government is committed to creating infrastructure along border areas to improve the livelihood of citizens, including in Arunachal Pradesh, the statement said.

People familiar with developments, speaking on condition of anonymity confirmed the existence of the village but pointed out that control over the Upper Subansiri region has been fluid for decades.

China claims the whole of Arunachal Pradesh as South Tibet and there are wide divergences in the perception of the border in this area. “The Chinese side doesn’t respect the McMahon Line in Arunachal Pradesh and constructs structures in areas claimed by it,” said one of the people cited above.

The Indian side too has bolstered the construction of infrastructure in Arunachal Pradesh and there have been instances of local commanders holding meetings to discuss structures falling in disputed areas, the people said.

Sim Tack, a Belgium-based security analyst for Force The analysis said the village in question in Arunachal Pradesh appeared to be part of China’s recent construction activity to bolster its territorial claims all along the LAC.

Tack said the Chinese village appeared to be several kilometres “inside the Indian claim” and noted that China has had a “small presence” in this area in the form of a military outpost since about 2000. “So, the Chinese presence is not necessarily new, but what is new is the building of a village to settle people in the area,” he said.

“China has been preparing infrastructure on its own side for a long time but now the infrastructure is being created in disputed regions in Ladakh, Arunachal Pradesh, and Bhutan. It would appear China is applying such infrastructure to strengthen its territorial claims,” Tack said.