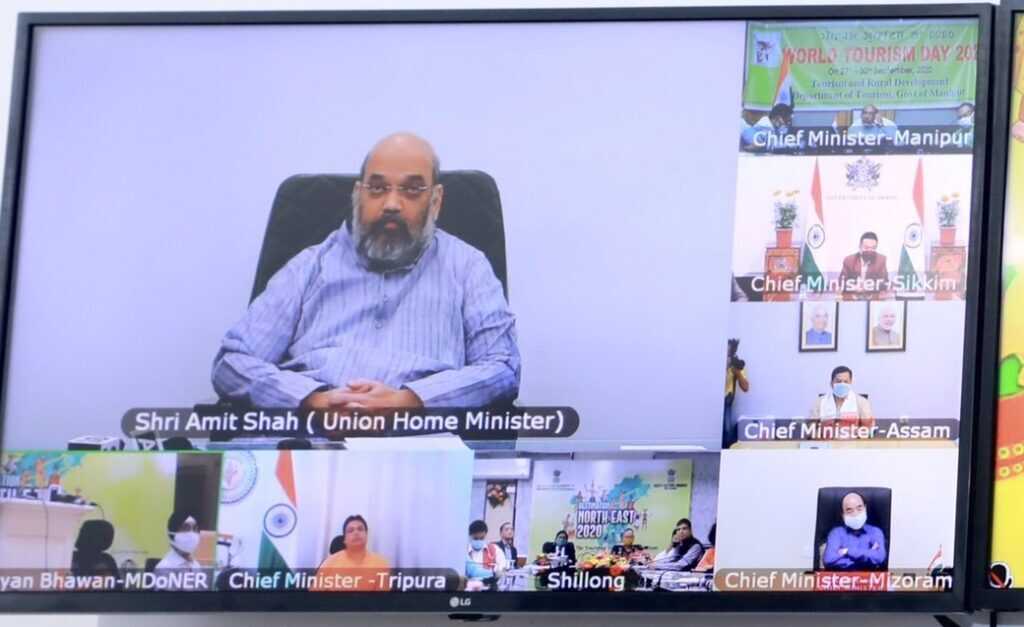 The Union Home Minister is also the Chairman of the North-East Council. On this occasion, Minister of State for Development of North Eastern Region Development (I/C), Prime Minister’s Office, Personnel, Public Grievances, Pension, Department of Atomic Energy and Department of Space, Dr Jitendra Singh and Chief Ministers of the eight North Eastern States were also present.

In his address, Amit Shah said that “North East, rich in natural beauty, folk culture and art, is fully capable of becoming a major centre of world tourism”.

Shah said that under the leadership of Prime Minister Narendra Modi, the North East region will emerge as one of the favourite tourism and business destinations of India.

The Union Home Minister also said that the ‘Destination North East-2020‘, which runs till 30 September, aims to introduce various cultures of the country to each other along with the tourist destinations of the North East and through this the whole of India will also get familiar with the vibrant and diverse culture of the North East.

Amit Shah further said that he has seen the tourist places of many states and countries but the beauty of the North East is unparalleled. Northeast is the jewel of India; without it the Indian culture is incomplete.

“Peace in the North East is very important for the economic development, promotion of tourism and employment in the region. The Northeast, which was once in the news due to terrorism, blockade, violence but now it is known for development, tourism, organic farming, industry and start-ups. This has been possible due to PM Narendra Modi Ji’s leadership in the last 6 years. A lot of work has been done to establish peace in the Northeast under the leadership of Prime Minister Narendra Modi. The Land Border Agreement with Bangladesh, Manipur Blockade, Bodo Agreement and the surrender by 641 cadres of 8 militant groups are among the notable achievements of the Modi government. After becoming Prime Minister, Narendra Modi has visited the North East more than 30 times, most by any Prime Minister since Independence. Development is not possible without proper funds. Earlier, plans were made for the development of North-East but the amount allocated for them was very less. The 14th Finance Commission increased the allocation for the Northeast by 251 per cent to Rs 3,13,375 crore, whereas previous government in 13th Finance Commission had earlier given only Rs 89,168 crore,” Amit Shah said.

He also said that, adopting an all-inclusive and all-encompassing model of development, Modi Government has decided to spend 21 per cent of the budget of the North-East Council on the backward districts, villages and deprived communities.

The Union Home Minister said that the Modi govt has made a huge effort in the direction of linking the North-Eastern states amongst themselves and connecting the region with the rest of India by rail, road & air links. Under this, 6 railway projects worth Rs 15,088 crore have been completed. Also, Rs 553 crore will be spent on the development of airports and about Rs 10,000 crore on 19 road projects of 869 km length.

“During the Corona era, the Modi govt has provided all health facilities to the people of North-East, including medicines and treatment through teleconference by AIIMS doctors. During this time the government provided 7.7 lakh metric tons of food grains to 3.09 crore people. Also, Rs 533 crore under PM Kisan Samman Nidhi and Rs 1,707 crore under Jan Dhan Yojana were directly deposited in the bank accounts of poor people. After Independence, the Northeast used to have 20 per cent share in the GDP of the country but now it has come down drastically,” Shah said.

He called for making the Northeast a tourism and industry hub and an IT and organic farming hub to increase the Northeast’s participation in the country’s GDP by 2024 and make it an important part of the Government of India’s Act East policy.

He also said that “under the leadership of Prime Minister Modi, eight states of the North East region are moving forward on the path of development and North-East will soon become a new engine of development for the country“.

Destination North East is a calendar event of the Ministry of Development of North Eastern Region conceptualized with the objective of taking the North East Region to other parts of the country and bringing them closer together in order to strengthen national integration.

For Destination North East 2020, the theme is “The Emerging Delightful Destinations” which speaks of the tourism destinations emerging stronger and more attractive when the Sector picks up momentum.

The four-day programme will feature Audio-Visual presentation of the tourist spots of the states and the region, messages from state icons and achievers, introduction to prominent local entrepreneurs and virtual exhibition of handicraft/ traditional fashion/ & local products.

There will be special messages from the state Chief Ministers and Tourism Ministers as well as cultural items of individual states and medley performances combining cultures of all the eight states.