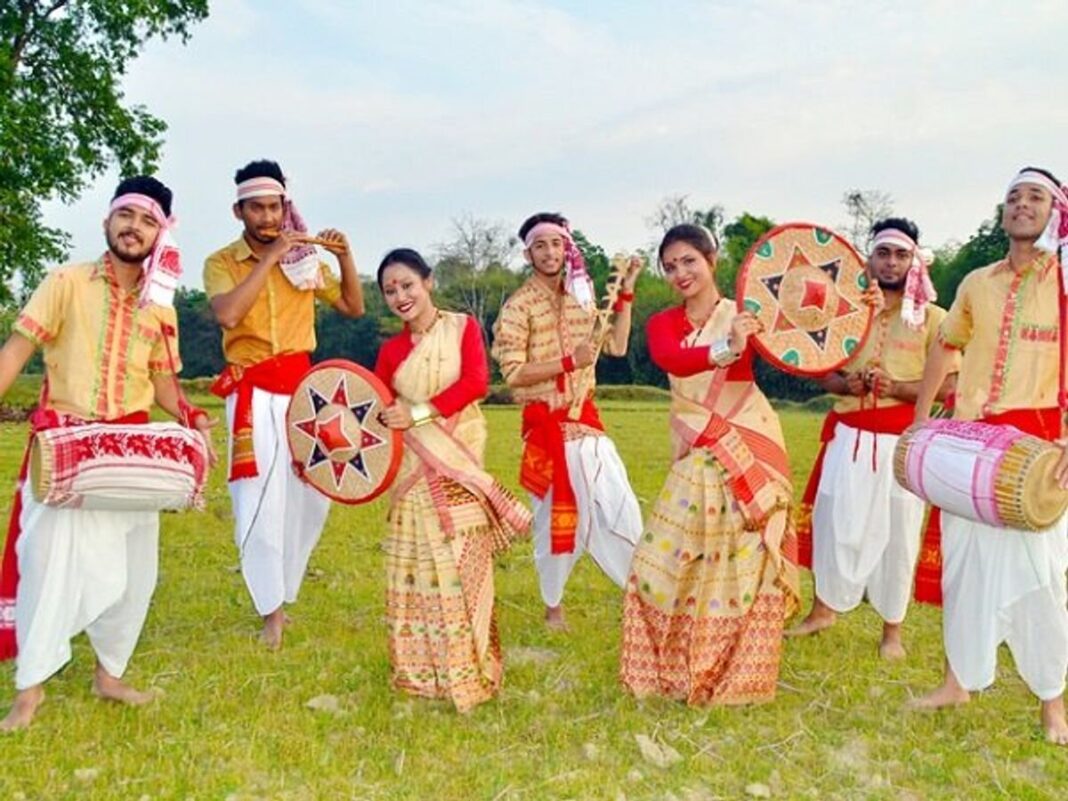 Assam, Jan 11: Amid the news of bird flu spread in some parts of the country, Moranjan village at Moran in Dibrugarh district of Assam is preparing for the celebration of Bhogali Bihu also known as Magh Bihu with full enthusiasm and joy.

Around 200 families of the village would be celebrating Magh Bihu together. The women folk were seen singing and dancing Bihu in the agriculture fields as they are getting ready to celebrate the harvest festival of Assam best known for feasting and celebrating good food.

Like most villages of Assam, here too around 80 percent of the population depends on agriculture for a living. While the women are busy preparing Bihu delicacies like pitha, laru, and other sweets and eatables, the men are busy building Bhela Ghar (a temporary night shelter made of bamboo, thatch, straws, dry leaves, etc,) mejis. They have arranged for Bhoj Bhaat (community feast) on the night of ‘Uruka’ (The night before Magh Bihu is called Uruka).

Magh Bihu or Bhogali Bihu also known as Maghar Domahi is one of the most significant cultural festivals of Assam. It is celebrated to mark the end of the harvesting season of the region. The celebration begins on the last day of the Assamese month Pooh (Poush) and starting of the month of Magh which falls around January 13-14 as per the English calendar. The festivities usually continue for a week.

The night before Magh Bihu is called ‘Uruka’. Early next morning Bihu celebrations begin. ‘Meji’ (Bonfire) is burnt and as a tradition, people take bath before setting up the meji on fire and while burning the meji people pray seeking blessings from their ancestors as well as Gods. As an occasion of celebrating the bounty of nature, food rules rampant in the Bihu festivities. There are three types of Magh Bihu celebrated in Assam, these are Bohag Bihu, Magh Bihu, and Kaati Bihu.

The day of the Bihu starts at early dawn with a post-harvesting ceremony called “Meji”. In this, bonfires are burned in the fields and people pray to their ancestral gods for blessings.

The word Meji is originally derived from the Deori-Chutia word Midi-ye-Ji where “Midi” denotes “Ancestral gods”, “Ye” means “Fire” and “Ji” means “Fly away”, signifying the worship of ancestral spirits that fly away with the fire.

The bonfires are usually made with firewood, green bamboo, and hay, and dried Banana leaves. People take bath before setting up the bonfire, as a tradition. The ritual of Meji Jwaluwa (Firing the Meji) is very enjoyable. Worshipping the Bhoral and Meji is done by offering Chicken, Rice cakes, Rice beers, Chira, Pitha, Akhoi, Horoom, Curd, and other eatables.

In the end, the Bhelaghar is also burned and people consume a special preparation known as Mah-Karai, which is a roasted mixture of rice, black gram. For breakfast and lunch, people consume various traditional dishes like various Fish, Chicken, Pork, Duck, Mutton curries along with Rice and Rice Beer. The ashes of the bonfire Meji and Bhelaghar are used in the trees and crops to increase the fertility of the gardens or fields.

Along with the main Me-Ji and Sangken, many related festivals can be seen in Assam and Arunachal. The Kacharis (a part of the indigenous Assamese community) have similar customs. On the seventh day of Magh Bihu they clean utensils and sacrifice fowls to Bathou, their God and go out carol singing, collecting foods. They set up Bhelaghars and burn them in the morning.

On the Full moon day of Magh month, the Khamti people observe a similar Bonfire tradition related to Buddha. Given the fact that no other Tai group follows such ritual, it can be concluded it would be better than the Khamtis merely adopted the ritual from the locals in the 18th century which was later developed into a Buddhist rite, similar to the Kechai-khati worship organized on the same day.