Home Top News All you need to know about the Bengali actor Srabanti Chatterjee; joins... 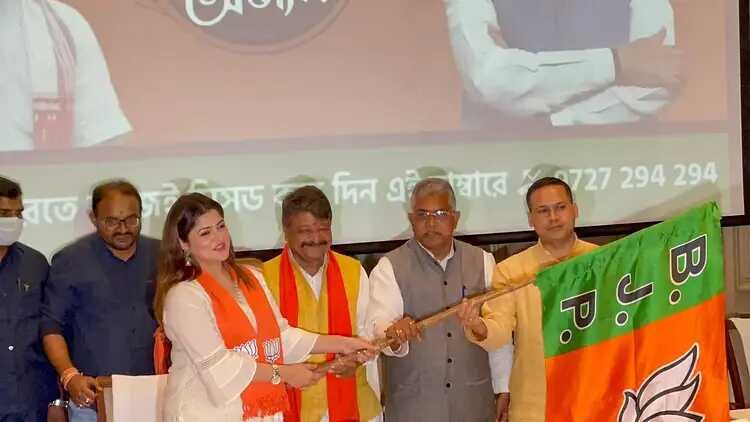 After taking BJP’s flag from its leaders here, Srabanti Chatterjee said that she had joined the party to work for the development of the state as well as the nation under the leadership of Narendra Modi.

“My father was in the Indian Army and he always taught me to work for the country, not only for the state,” the actress said.

“I have joined BJP as I think the party is working for the development and change in the state,” she added.

Recently, many actor-actresses from the Bengali film and television fraternities have been seen joining either the TMC or BJP ahead of the West Bengal assembly election.

Srabanti Chatterjee is a Bengali actor and primarily works in in cinema of West Bengal, based in Kolkata. Srabanti began her cinematic career as a child artist where-in she debuted in the 1997 film ‘Mayar Badhon‘ alongside Prosenjit Chatterjee and Rituparna Sengupta while as a lead artist she made her debut in the film Champion in 2003.

The actress went on to do many films viz. Amanush‘, ‘Kanamachi‘, ‘Jio Pagla‘, and ‘Chobiyal‘ and have also ventured into the webspace. Her web series ‘Dujone’ is yet to be released and will be seen opposite actor Soham Chakraborty. She has also been a part of television reality shows as a host and judge.

While in her personal life, Srabanti had got married to Rajiv Kumar Biswas in 2003 but they ended their 13 years of marriage in the year 2016, the same year (2016) she got married to Krishan Vraj but spilt up in a year in 2017.

The actress after two years got hitched to Roshan Singh but recently there were rumours of the couple calling it quits but there is no confirmation on it yet.

Srabanti is mother to son Abhimanyu Chatterjee, while his biological father is Rajiv Kumar Biswas.

Last month, popular Bengali actor Yash Dasgupta also joined the BJP. Considered to be a close-aide of TMC MP Nusrat Jahan, Dasgupta said that the BJP gives chance to the youngsters to work for the people.