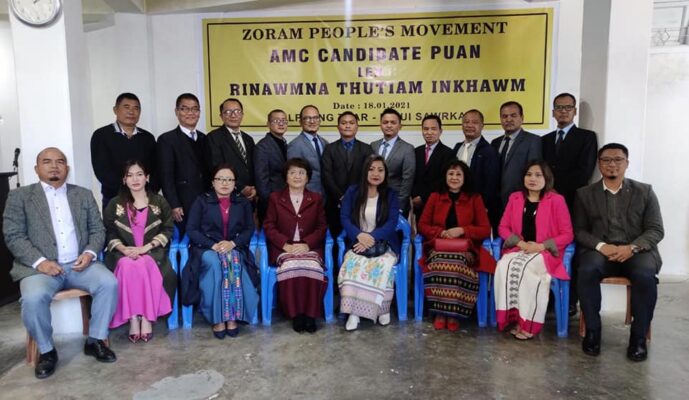 The polls are expected to be held next month, the AMC polls are yet to be notified by the state election commission.

18 out of 19 candidates, including well-known TV presenter Baryl Vanneisangi is a debutant, while Lalthankhuma, a candidate from AMC ward-XI had contested the municipal polls in 2015, according to ZPM general secretary Lalmunapuia Punte.

Announcing the candidate names, Sapdanga said the motto of the party is to establish people’s government through a dynamic and new political system.

He urged party workers especially the candidates to keep aside their personal ego and refrain from canvassing votes through backstairs influence. Claiming that people have full faith in ZPM, the leader said the party would win the upcoming polls.

“We will give priority to the people if we come to power in the AMC polls as ZPM’s motto is to have people’s government,” Sapdanga said, adding that party leader Lalduhoma will release the party manifesto on Tuesday.

These are the first municipal polls and third elections to be contested by the 3-year old party since its formation in August 2017.

In 2018, the ZPM contested the assembly polls on independent as the party was yet to get registration and won 7 seats to be the second single largest party after Zoramthanga led Mizo National Front (MNF) in the state.

However, the party now has only 6 members in the 40- member assembly after its leader Lalduhoma has been disqualified under anti-defection law in November last year.

The ZPM also won 263 out of 2,454 seats in the village council polls across nine districts and 38 out of 1,565 seats in local council polls in Aizawl held in August last year to become at third after MNF and Congress.

Meanwhile, sources said that the ruling MNF will also release a list of its candidates for the upcoming AMC polls. The AMC was established in 2010 under the Mizoram Municipalities Act, 2007.

There are 19 members, including 6 women (reserved seat). In the last Aizawl Municipal Corporation polls held in 2015, the MNF had won 11 seats, followed by Congress, which won 7 seats. Mizoram People’s Conference (MPC) had bagged one.