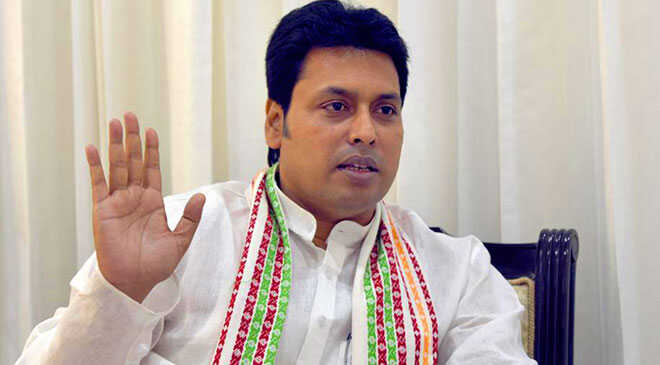 Agartala, August 14: Tripura Pradesh Youth Congress took out a protest march against the alleged medical negligence of the Tripura government on Thursday, demanding the resignation of chief minister Biplab Deb after the death of an infant in Tripura’s GB hospital.

Deb, who additionally looks after the health portfolio in the state cabinet has been charged by the Youth Congress for mishandling the COVID situation in the state, after the brutal death of a three-day-old baby who succumbed to death due to the alleged mistreatment of a nurse of the GB hospital.

The agitators burnt effigies of Chief Minister Biplab Deb and demanded a resignation from the Health Ministry. They also demanded a strict investigation on the baby’s death and sought strict action against the criminals behind this.

The protestors further alleged crippling health infrastructure in the state during the tenure of Deb as the concerned minister.

They further alleged lack of basic necessary equipment in the state’s most prominent hospitals like GB, IGM. A serious shortage of oxygen cylinders, AC, fans in ICUs and unavailability of doctors to treat patients in the time of emergency, deficiency of ventilators in the GB COVID care unit and other issues were raised by the Congress in their protest.

The 3-day-old infant died after a nurse of the GB Pant hospital in the Tripura capital allegedly inserted a Nasal swab to take a sample for Coronavirus testing on Wednesday.

As the family has claimed, that the baby died the very day after bleeding from the nose while the testing process.