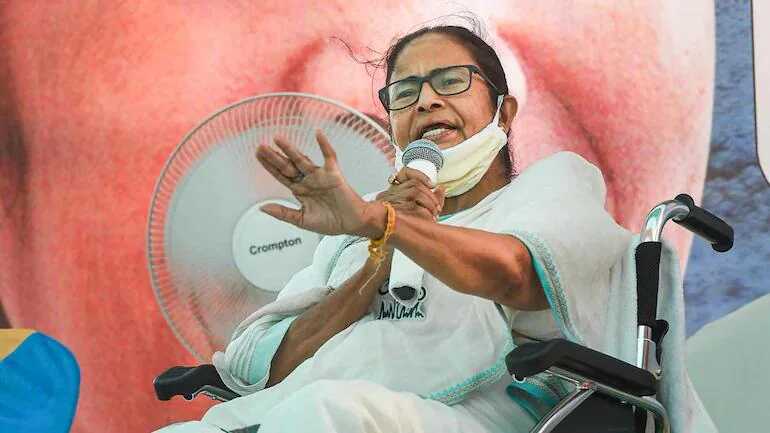 Bengal, April 5: West Bengal Chief Minister and Trinamool Congress supremo Mamata Banerjee on Monday said she is confident of her win in the 2021 state assembly polls and then later, she would aim for power in Delhi.

Mamata Banerjee, who was addressing a rally in Debanandapur in Hooghly district, said she would win the Bengal election with “one leg“, referring to the incident in Nandigram last month where she suffered injuries on her left leg. After Bengal, Mamata said she will win Delhi.

“I will win Bengal with one leg and in the future will get victory in Delhi with two legs,” Mamata Banerjee said.

Mamata Banerjee had suffered injuries on her left leg and shoulder at Nandigram on March 10 while she was greeting people from her vehicle during an election campaign. Even though TMC claimed the incident was a “deep-rooted conspiracy“, the Election Commission said there was “no evidence” of an attack on Mamata Banerjee. The EC concluded that the Nandigram incident was an accident and not a planned attack.

Mamata Banerjee lashed out at the BJP and said the party doesn’t have any “local candidates” to contest in the ongoing West Bengal election. She said those who “cannot say Sonar Bangla properly” cannot rule Bengal.

“BJP, can’t you find a local candidate to contest elections? They don’t have locals, all their people are borrowed from either TMC or CPM. They are sprinkling money like water from a hosepipe. They, who can’t say Sonar Bangla properly, can’t rule Bengal,” Mamata Banerjee said.

Also Read: CM Mamata GOTRA row: Owaisi asks ‘What should happen to people like me who aren’t Shandilya or Janeudhari?’

“What was the need for an eight-phase election? It was done by BJP Mandal. Given the present situation (Covid), shouldn’t they have wrapped up the election within a short period of time?” Mamata Banerjee said.

Mamata Banerjee also claimed that she does not care about Prime Minister Narendra Modi calling her “Didi..o… didi” in a tone that some TMC women leaders have termed as “sarcastic“.

“He (PM Modi) does this every day, I don’t care,” Mamata Banerjee said.