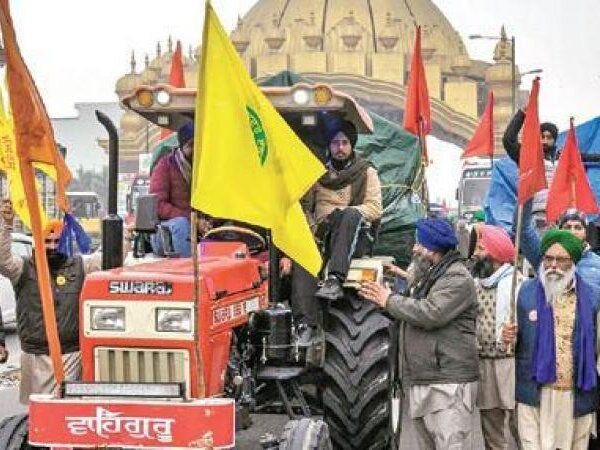 West Bengal, Jan 26: While chaotic scenes at the tractor rally held by Punjab farmers in the national capital drew the attention of the nation, in poll-bound Bengal, the Trinamool Congress (TMC) and the Congress condemned the Delhi Police and announced agitation across the state. The Left parties and members of the Sikh community on Tuesday successfully held rallies in the districts and Kolkata.

“We condemn the baton charge on farmers and use of tear gas shells by the Delhi Police. We will organise protests in all districts on Wednesday,” said Becharam Manna, president of the TMC’s peasants’ front and legislator from Haripal in Hooghly district.

Chief Minister Mamata Banerjee took to the social media to offer her support to the farmers.

“Deeply disturbed by worrying & painful developments that have unfolded on the streets of Delhi. Centre’s insensitive attitude and indifference towards our farmer brothers & sisters have to be blamed for this situation. First, these laws were passed without taking farmers in confidence. And then despite protests across India & farmers camping near Delhi for last 2 months, they’ve been extremely casual in dealing with them. The centre should engage with the farmers & repeal the draconian laws,” her tweet read.

Deeply disturbed by worrying & painful developments that have unfolded on the streets of Delhi.

Centre's insensitive attitude and indifference towards our farmer brothers & sisters has to be blamed for this situation. (1/2)

In Hooghly, a long agitation against the acquisition of farmland by the erstwhile Left Front government for the Tata Motors small car plant at Singur helped chief minister Mamata Banerjee oust the 34-year-long rule of the Communist Party of India (Marxist)-led coalition in 2011. Ratan Tata had to shift the project to Sanand in Gujarat. Another land movement was led by her at Nandigram in East Midnapore district.

Bengal Congress president Adhir Ranjan Chowdhury announced that his party would hold a road blockade in Kolkata on Tuesday afternoon in protest against Delhi Police’s action.

The peasants’ front of the CPI(M) and other Left parties held rallies with tractors, motorcycles, auto-rickshaws and cars across all 23 districts, demanding the withdrawal of the Centre’s recent farm laws. Farmers also walked for kilometres in long processions.

The rallies of the Left parties started after the government’s official programmes on the occasion of Republic Day. The biggest rallies were seen in East Burdwan, Hooghly, Murshidabad and East Midnapore districts.

Amal Haldar, senior peasants’ front leader of the CPI(M) said, “More than 600 tractors and two thousand motorcycles took part in the rally that passed through Burdwan town. This is the biggest farmers’ protest in the state’s recent history.”

Top CPI(M) leaders, including Bengal Left Front chairman Biman Bose and CPI(M) state secretary Surjya Kanta Mishra, led a huge roadshow in the heart of Kolkata along with leaders of and supporters of other Left parties on Tuesday afternoon. Videos of the Left rallies went viral on social media.

Members of the Sikh community took out rallies with cars and SUVs and drove past the state headquarters of the Bharatiya Janata Party (BJP) in central Kolkata.

Chief minister Mamata Banerjee has been supporting the farmers of Punjab ever since they started the agitation outside Delhi. Banerjee even sent Derek O’Brien, the TMC’s leader in the Rajya Sabha, and some other MPs to interact with the agitators.