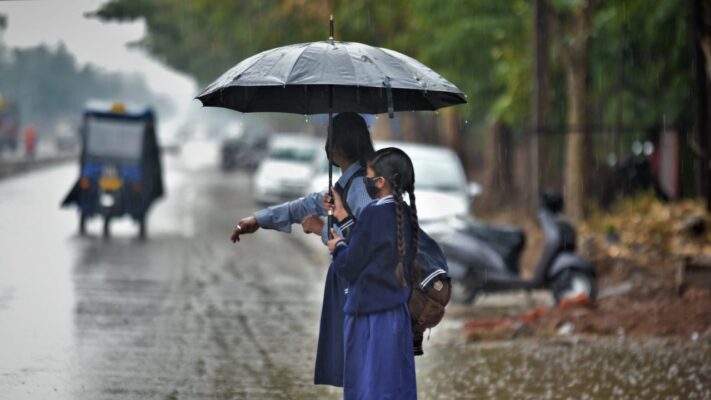 Northeast, March 31: Parts of Northeast India like Assam, Meghalaya, Arunachal will continue experiencing the weather change rain spell that began drenching the region at the start of this week, with heavy showers particularly likely over the states in the next 24-48 hours.

According to the India Meteorological Department (IMD), the strong lower-level south-westerly winds blowing in from the Bay of Bengal, coupled with other favourable meteorological conditions, will cause rainfall, thunderstorms, hailstorms, thundersquall, and lightning over the Northeast for the next two days, i.e. March 31 and April 1.

Fairly widespread to widespread showers, thunderstorms, hailstorms, thundersquall, and lightning are all expected at isolated places across Northeast India on Wednesday and Thursday, although maximum rainfall activity is expected on Wednesday itself.

Assam, Meghalaya, Nagaland, Manipur, Mizoram, and Tripura will all witness isolated heavy falls on Wednesday, whereas Arunachal Pradesh and Sikkim will be in for heavy downpour on Wednesday as well as Thursday.

As per The Weather Channel’s met team, 3-day total precipitation of 50 mm to 120 mm is possible over Arunachal Pradesh and adjoining areas from Wednesday to Friday.

These rough weather conditions could even lead to landslides and inundation of low-lying areas, particularly at isolated places across south Assam, Meghalaya, Tripura, and Mizoram over the next two days.

Furthermore, localized flooding of roads, water-logging, closure of underpasses, occasional reduction in visibility due to heavy rain, disruption of traffic, minor damage to kutcha roads, damage to vulnerable structures, and localized mudslides are all possible in the region while the rough conditions persist.

Given these predictions, the IMD has issued an orange alert over (‘be prepared’ for rough weather) Assam, Meghalaya, Nagaland, Manipur, Mizoram and Tripura on Wednesday, and just over Assam and Meghalaya on Thursday. Arunachal Pradesh and Sikkim, on the other hand, will remain under a yellow watch (‘be aware’ of local weather situation) on both Wednesday and Thursday.

Checking for traffic congestion while heading out, following any traffic advisories issued due to rough weather, and lastly, avoiding areas that face water-logging problems often and staying in vulnerable structures has also been recommended.

Meanwhile, all the Northeastern states are set to end the month of March with below-average rainfall. Between March 1-30, Arunachal Pradesh (89.6 mm), Tripura (46.7 mm), Assam (29.8 mm), and Nagaland (29 mm) have all recorded ‘deficit’ rainfall as compared to their long-term monthly average, whereas Meghalaya (29 mm), Mizoram (16.8 mm) and Manipur (13.9 mm) have registered ‘large deficit’ precipitation figures in this period.