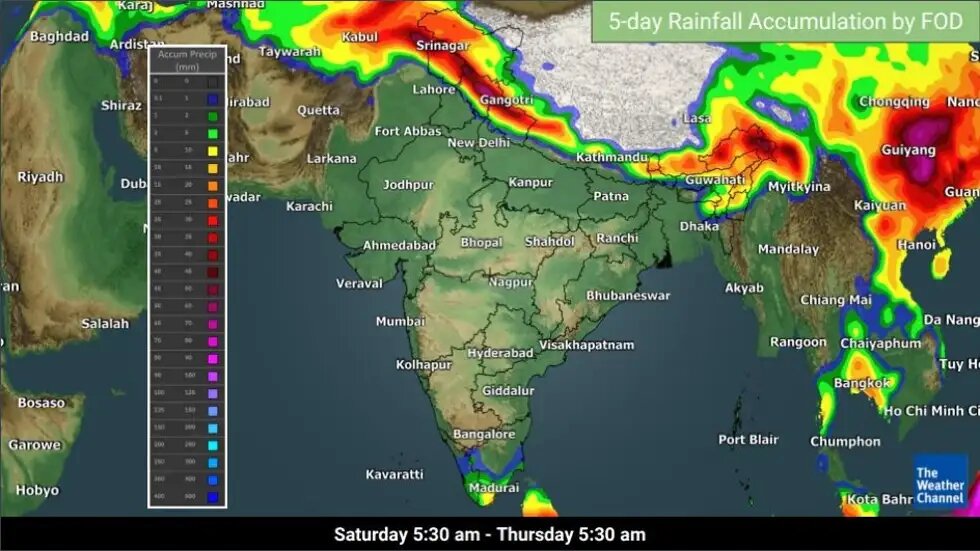 Assam, 6 March: A fresh western disturbance is set to affect the Western Himalayan Region (WHR), causing isolated snowfall over Ladakh, Jammu & Kashmir, and Himachal Pradesh from Saturday afternoon, the peak will fall on Sunday, with 25-75 cm of fresh snow accumulation across the northern parts of Jammu & Kashmir, Himachal Pradesh, and Uttarakhand a day along with thunderstorms. It will increase both in intensity and coverage toward Sunday, engulfing Uttarakhand before tapering off on Monday.

After a brief relief on Tuesday, there will be another round of snowfall in this region from Tuesday night.

In view of the above predictions, the entire WHR will remain under an orange alert (“be prepared” for rough weather) on both Saturday and Sunday.

Meanwhile, the ongoing snow/rainfall event along with thunderstorms across Arunachal Pradesh will continue this weekend and into next week, engulfing adjoining areas at times. Locally heavy rainfall of up to 50 mm is expected across eastern Arunachal Pradesh on Saturday.

Also Read: Travel restrictions imposed on travellers from these 5 states in Sikkim

A cyclonic circulation will become notable in the Indian Ocean near the equator next week. The related rainband will be sufficiently far from Southern India, but the southernmost tip of the peninsula may receive a few spells of showers along with thunderstorms from Monday.

The IMD ads that scattered to fairly widespread rains will drench Assam and Meghalaya, and isolated to scattered showers will fall over Nagaland, Manipur, Mizoram, and Tripura till March 7. The precipitation will become isolated to scattered over the region on March 8-9. All this while, isolated thunderstorms, and lightning will also be on the horizon.

As for temperatures, the maximums will be 4 to 8°C higher than normal across much of Rajasthan during this forecast period, whereas below-average maximums are likely across the Brahmaputra Plains.

Overnight minimums will be warmer than normal across much of the country during this forecast period, with the exception of the Deccan Plateau, where temperatures will remain normal or slightly cooler until Sunday. Inland Andhra Pradesh will remain below normal beyond Monday.