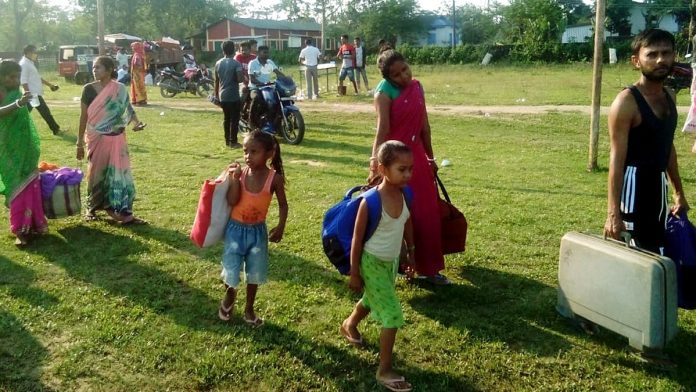 Assam: Unexplained tremors force over 1000 people of three villages near Baghjan to leave their homes

Guwahati, June 13: After the fire incident of the gas well of Baghjan oil field in Assam Tinsukia district, many villagers living nearby the site were also forced to leave their homes following unexplained tremors felt in the area in last two-three days.

Over 1000 people of Natungaon, Gotong and Kaliapani near Baghjan oil field were shifted out since June 11 to relief camps set up at Guijan area.

Saroj Gohain – a resident of Guijan area said that, after the gas well fire incident, the villagers felt some tremors like earthquake.

“The villagers had scared about the unexpected incident. Some houses had damaged in the vibrations. Around 600 families were shifted to Guijan High School,” Saroj Gohain said.

On the other hand, Mulapi Gohain – a resident of Kaliapani village said that she and her family members were very scared following the earthquake-like vibrations.

“We are facing headache, eye-burning like problems after the Baghjan fire incident. We are feeling unsafe,” Mulapi Gohain said.

Meanwhile, the experts of the North East Institute of Science and Technology (NEIST) are trying to ascertain the cause of the tremors.

In a press release issued by the Oil India Limited (OIL) said that – “There were some reports of tremors in nearby villages. OIL has contacted North East Institute of Science and Technology (NEIST), Jorhat to carry out a study to see if there is any induced seismicity due to the blowout.”

“The Oil India Limited (OIL) must have to give compensation against all damages,” Durga Bhumij said.

Two firefighters were killed and four others injured in the massive gas well fire incident.