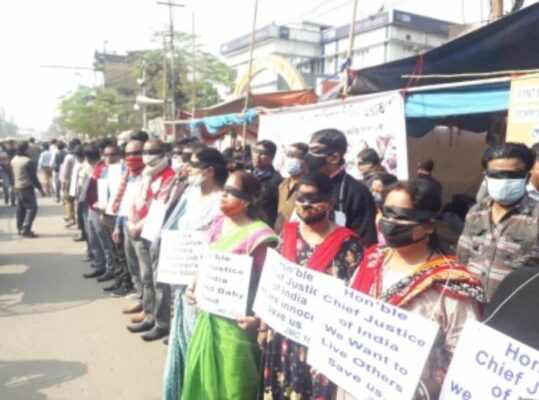 Tripura, Jan 6: Despite cold weather, the indefinite sit-in protest by thousands of Tripura government school teachers, who had lost their jobs following court verdicts, continued for the 30th day even as the BJP-led state government is yet to hold any talk with them during the ongoing stir.

The agitating teachers had rejected the Bharatiya Janata Party-led government’s offer to apply for the vacant posts of different departments afresh for which the state government recently issued notifications.

Accompanied by their children and family elders, members of the Joint Movement Committee (JMC), which is spearheading the protest in Tripura continued their sit-in demonstrations and vowed to continue their agitation until the government reinstated their jobs.

Meanwhile, a five-member delegation of the opposition Communist Party of India-Marxist led by former Chief Minister Manik Sarkar met Chief Minister Biplab Kumar Deb and requested him to resolve the issue at the earliest.

Both the Chief Minister and state Education and Law Minister Ratan Lal Nath has urged the agitated teachers to compete for around 9,000 vacant posts in various departments, including the Education Department, for which the state government recently issued recruitment notifications.

Accusing the previous Left Front government, Nath said due to its mistakes and wrong decisions, 10,323 government teachers had lost their jobs due to the court orders. 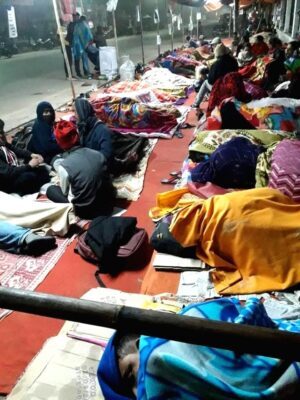 Sarkar, who is now the opposition leader, told the media that after the Tripura HC and the Supreme Court had terminated the jobs of 10,323 government teachers in 2011, 2014, and 2017, the then Left Front the government had created 13,000 posts to accommodate these teachers alternatively.

However, he alleged that the BJP leaders, before the 2018 Assembly polls, promised to regularise their jobs if they come to power.

“But nothing has been done by the BJP government for these hapless teachers,” said Sarkar, who was the Chief Minister for 20 years till the BJP-led government came to power in Tripura in March 2018.

The BJP-led Tripura government had earlier given a lump-sum financial aid of Rs 35,000 to the residual numbers of 8,882 government school teachers, who lost their jobs from March 31 this year, following SC and Tripura HC verdicts had cited “discrepancies in recruitments“.

Of the 10,323 former government teachers, 1,365 people got alternative jobs and availed different income avenues while 78 people died with many of them committing suicide.

JMC’s Joint Convener Dalia Das said the teachers already completed their government service for many years and several of them crossed their stipulated age limit while the state government’s offer is “impractical” and against the interest of the teachers.

“We had called off our agitation after CM Biplab Deb on October 3 assured to take steps to solve our problems permanently within two months. The two months have already lapsed but Deb and his government are yet to take any step when the teachers are suffering a lot after losing their jobs in March this year,” Das told the media.

Another JMC’s Joint Convener Bimal Saha said thousands of teachers in the protest in Tripura, including their family members, are facing hardships for the past nine months while 76 retrenched teachers have already died with some committing suicide.

The teachers were inducted into the state government schools in different phases from 2010 when the CPI-M-led Left government was in power. The Tripura HC in 2011 and 2014 in separate judgments terminated the services of all 10,323 teachers, saying the selection criteria had “discrepancies” and subsequently, the apex court upheld the HC’s decision. After separate appeals by the previous Left and the incumbent BJP governments, the Supreme Court, however, extended their services up to March 2020.