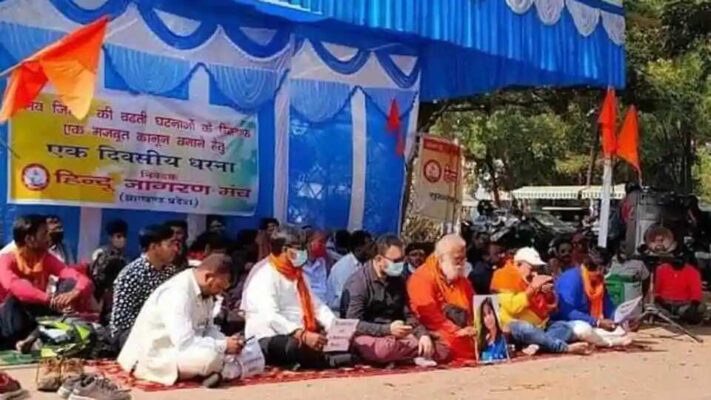 Tripura, 28th November: The Hindu Jagaran Mancha in Tripura is demanding an effective law to curb alleged ‘love jihad’ across the country. Around 300 members of the outfit blocked the National Highway at Subhash Bridge in Udaipur of Gomati district in support of their demand.

Citing instances of alleged ‘love jihad’ across the country and claiming that incidents like the recent abduction and rape of a Hindu minor girl at Boxanagar– a border village in Sepahijala district— by a youth from a minority community was on the rise, the agitators demanded a stringent law to curb forced interfaith relationships.

A case was registered on October 27 against the youth under Section 366 (A), 376, and 4 of the POCSO Act. Within a few days after her abduction during the Durga puja festivities, the minor girl was recovered from Durlabhnarayan area in the district, but the accused is yet to be arrested.

“The protesters demanded a strict law to check love jihad. The prime accused in the abduction and rape of the minor is absconding and the police investigation is on to trace the accused,” said Dhrubha Nath, Udaipur sub-divisional police officer.

“At least nine cases of Love Jihad were lodged at different police stations in Tripura during the Covid-19 pandemic. No accused has been arrested in any of these cases. A law can act as a safeguard for such cases,” said Uttam Dey, Jagaran Mancha president.

However, the police rejected the claim and said no such the case related to purported ‘love jihad’ was lodged in the state in the past three-four months.

The protest comes on a day when Uttar Pradesh governor Anandiben Patel gave assent to an ordinance against forcible or fraudulent religious conversions, which provides for imprisonment of up to 10 years and fine of up to Rs 50,000 under different categories.

Uttar Pradesh Prohibition of Unlawful Conversion of Religion Ordinance, 2020 has been brought in by the Yogi Adityanath government to curb religious conversions only for the sake of marriage. According to the ordinance, a marriage will be declared “null and void” if the conversion of the woman is solely for that purpose and those wishing to change their religion after marriage needs to apply to the district magistrate.

Madhya Pradesh government has also indicated that it would double the duration of the sentence to 10-years of rigorous imprisonment from a 5-year sentence for cases of forceful religious conversions and marriages by enticement or fraud.