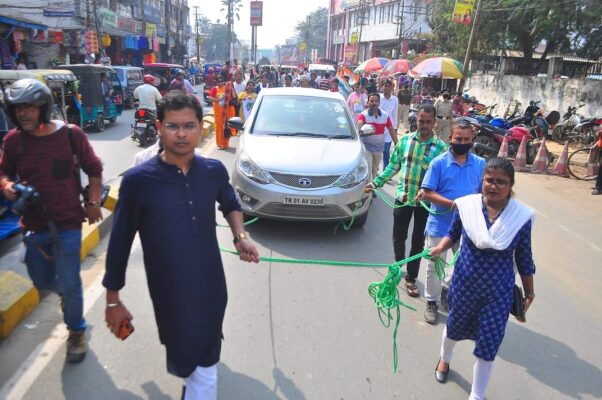 Tripura, Feb 17: To protest against the price hike of fuel and LPG cylinders by the central government, the Tripura Congress activists on Wednesday pulled cars with ropes in Agartala.

Tripura Pradesh Youth Congress supporters and the Mahila Congress activists were pulling the car, and were followed by a rally with bikes in Agartala streets.

State youth Congress president Pujan Biswas said that the price of fuel and LPG cylinder has increased drastically in the past month across the country and therefore they were protesting against it.

“A litre of petrol costs Rs 89.74 while diesel costs Rs 83.43 per litre. The price of an LPG cylinder has increased by Rs 75, and it stands at Rs 930. This has had a direct impact on the price of the essential commodities,” Biswas said.

Pujan Biswas also said that neither the centre nor the state made any attempts to reduce prices, even though crude oil prices in the international market are far below the market price.

Later, walking through the streets of Agartala, the Congress activists burnt the effigy of Prime Minister Narendra Modi in front of their party office in Post Office Chowmuhani.