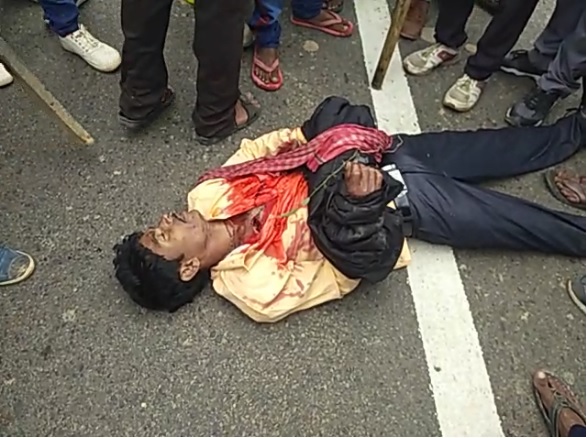 Tripura, 21st November: One person has died in alleged police firing in North Tripura this afternoon.

Cops opened fire to control the violent protestors in Tripura when Joint Movement Committee (JMC) members were staging a protest on National Highway 8 on Saturday.

The deceased is identified as Srikanta Das. Two protestors were also injured in the incident.

The situation spiralled out of control when violence erupted with an attempt to block the National Highway as a part of the ongoing strike which entered the fifth consecutive day.

According to the source, police personnel has also sustained injuries when protestors attacked them.

Vikas Das, an eyewitness said “We were protesting here and police started firing during the protest. One person has died on spot. One is having a leg injury. 2 people have been taken to hospital.”

“4 people have been injured in the firing by police,” Amarnath, a local confirmed.

At least 35,000 Bru refugees were staying at 6 relief camps located in Kanchanpur and Panisagar sub-division of North Tripura District after they fled their native place in Mizoram followed by ethnic clashes.

However, the Bengali organizations said, in 1997 – 2000 the Bru refugees had evicted 750 Bengali and Lusai families that used to stay near the relief camps.

In 2020, the BJP government took initiatives, and in a quadripartite meeting, it was decided that the Bru refugees would be settled in Tripura and a package of Rs 600 crore was announced for settling them.

The local bodies including some organizations demanded equal distribution of the Bru population among all the eight districts of the state and soon sporadic protest broke out in the entire Kanchanpur sub-division that continued till date.