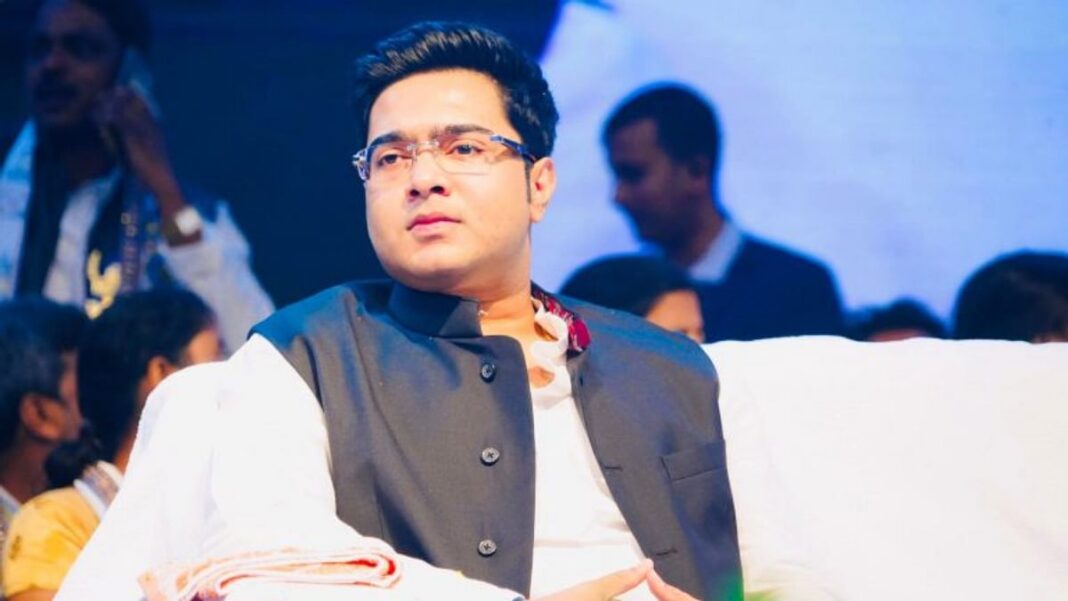 Brandishing the two-page letter, the Diamond Harbour MP threw a challenge to Suvendu asking him to prove his allegation false. “This is the letter of Sudipto Sen submitted in Court. I can send the letter to the forensic department to scrutinize whose handwriting is this and when was this written. Sudipto Sen wrote, ‘I have paid crore rupees to Suvendu Adhikari.” Then who was bribed? Who is the betrayer? For ten years he stayed with us and now the perpetrator is disguising as the priest.”

While sharing the letter MP said that he is ready to take his life if any evidence can be submitted against him.

“I am giving the proof. If you can prove this against me, I will sentence myself to death. Would you do that? Do you have the courage to? Would you fight? Let’s fight nowhere in front of people. He also wrote. “They used to blackmail me. Even the night before I left, Suvendu came to my office and took the money. Today you are singing with the lotus flower? Why? Because CBI would catch you? You have sold your backbone and you are disguising now. Do you want to fight with me? I have proved against you. If you can do so with me I will sentence myself to death. Come fight with me,” Banerjee said.

Bengal BJP had inducted Mamata’s once-trusted lieutenant Suvendu in the party last month eyeing 39 Assembly seats in Jungle Mahal. Since then, the saffron camp has been organizing regular rallies and roadshows projecting Suvendu as a key tool to sharpen attack on the ruling party on the “extortionist nephew” issue.

BJP’s high-command, including Union Home minister Amit Shah and national president JP Nadda, never missed the opportunity to raise the issue whenever they visited Bengal and addressed rallies in the recent past.

Abhishek’s disclosure of Sen’s letter said to be an effort to blunt the attack lashed out buy Suvendu and other BJP functionaries.

“They are blaming me of nepotism? They are one family where seven people dose politics and they call this pishi-bhaipo government. I am giving another challenge. I will leave politics in 24 hours. In their family, they have five members, 2 MPs, the Minister, the Chairman of Municipality, and Counsellor. Mukul Roy is the Vice president of BJP and his son is MLA of Bijpur. Kailash Vijayvargiya is the National General Secretary of BJP and his son is the MLA of Madhya Pradesh. They are blaming me for nepotism. Rajnath Singh is the defence Minister and his son Pankaj Singh is the MLA of UP. Suvendu Adhikary was the MLA, his father was a member of the parliament, His brother is another member of parliament, and another brother is the chairman of the municipality. They are stacking me on nepotism. I challenge them if only one person does politics from your family, I will resign from politics tomorrow. Do you have the courage? I will ask the Prime Minister to launch a bill where only one person from a family will work in politics. I will be the first person to cast a vote there. Can you launch this bill? I will resign. I am telling only Mamata Banerjee will be politics from my family. Can you choose who is that one person who will do politics from your family? Do you have the courage?” said TMC MP.

Abhishek also attacked the chanting of ‘Jai Shri Ram’ and the reaction of CM Mamata during ‘Parakram Diwas’ at Victoria Memorial.

“If you want to enunciate Jai Sri Ram do it at home or in Mandir. But for politicians, people are the only God. Mamata Banerjee has launched various projects for the people. The central government has barred 1000 crores of rupees. Why? Because they want to kill Bengal. But they cannot do that. People will give the correct answer. Mamata Banerjee has launched a Sasthasathi card for the people and Dilip Ghosh claims it to be baloney. Purulia’s MLA, Jyotirmoy Mahato applied for the card and said that ‘Mamata Banerjee zindabad’. Mamata Banerjee’s government did for Bengal as nobody has done before. People who can fight politically, please fight politically. Show what BJP has done in the last seven years and what TMC has done in the last 10 years.”

Abhishek Banerjee challenges the BJP by saying that if they weren’t able to win this time they will not contest any other election.

“Compare their work and make the verdict. If we cannot defeat you, we would not keep our foot forward in politics anymore. We have put forward what developments have been done in the last ten years. The development has been done in healthcare, education, industries, and in all other areas. Mamata Banerjee has given money to people to different houses to build their houses. BJP government has grown cataract in their eyes seeing this. She will start a new project names ‘Chanisree prokolpo’ where she would get rid of the cataract from the eyes of BJP. The panchayat has grown so much. Is there any other state where food is free, education is free?” Abhishek Banerjee said.

“She is the only Chief Minister who made the Prime Minister understand that if anybody disrespects Netaji standing on the land of Bengal, then she will protest against it. She protested against it and did not give the speech in the meeting. Netaji Subhash Chandra Bose taught us patriotism. On his land, people had voted for her with 2.5 crore votes,” TMC MP Abhishek added.

Taking a dig on Subhashish Banerjee, TMC MP Abhishek from Diamond Harbour said “People are not fools. Subhashish Banerjee said in the meeting that he had made Abhishek Banerjee win. I got 17,000 votes when he was on the field and I won by 3.5 lakh votes when he was sleeping at home. He was sleeping for three years. He apologized to make me win. The more you come on the field, it will benefit TMC. The more people see you, the more votes would be cast for TMC. Let them come to the field. They should apologize to people for sleeping. While taking the money they were saying, they will show Abhishek Banerjee later on. I should file a case against you as you took the money by my name. Are you not ashamed? Which constituency are you going to stand for, it is my responsibility to make you lose? I thank every brother and sister who came here today. No seat should go for CPI (M), BJP, or Congress. You people will make Mamata Banerjee win. Stay united. They have Nathuram in their soul and we have Subhash Chandra and Khudiram in our souls. This is the difference between us.”