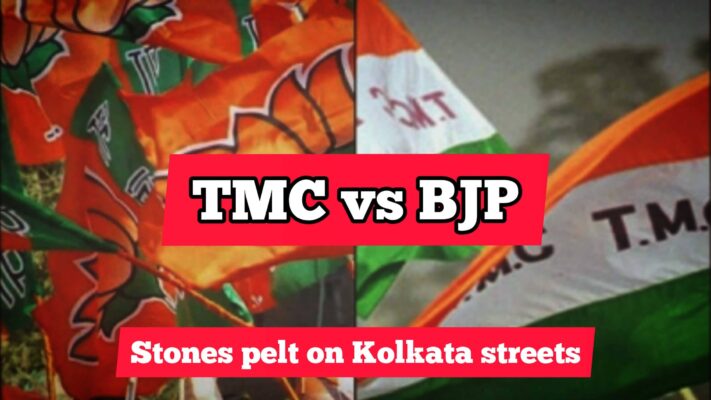 Videos of the incident in Bhabanipur, which is a traditional bastion of Bengal CM Mamata Banerjee, show rival groups pelting bricks and stones at each other as police personnel struggle to control the mob.

BJP has alleged that when their candidate Rudranil Ghosh was campaigning in Bhabanipur on Thursday evening, TMC goons attacked their vehicles and 15 BJP workers were left injured. Rudranil Ghosh, too, suffered injuries on his leg.

They further alleged that as the BJP workers reached the Chetla police station to lodge a complaint, TMC goons too reached the station and attacked their vehicles.

Ahead of polling in some of the key assembly seats in Kolkata, the continued violence in Bengal has reached the state capital now. After Bhabanipur, the Chetla area in South Kolkata also turned into a battlefield as Trinamool and BJP clashed here.

Chetla is known to be the bastion of state minister and TMC heavyweight Firhad Hakim, where the BJP workers led by Rudranil Ghosh clashed with TMC workers.

Also Read: Ahead of Bengal Assembly Elections 2021: Poster war breaks out between BJP and TMC

The BJP has claimed that about 15 party workers have been injured in the incident. Rudranil has alleged that Firhad Hakim’s followers attacked him with firearms. Leaders of both parties gathered at the Chetla police station to complain about the clashes.

According to police, a group of BJP supporters was returning towards Chetla from the election campaign when rival groups of TMC and BJP came face-to-face at the road crossing in Kolkata. Initially, the number of police personnel at the spot was also few.

Upon receiving information, a large police force reached the spot and brought the situation under control.