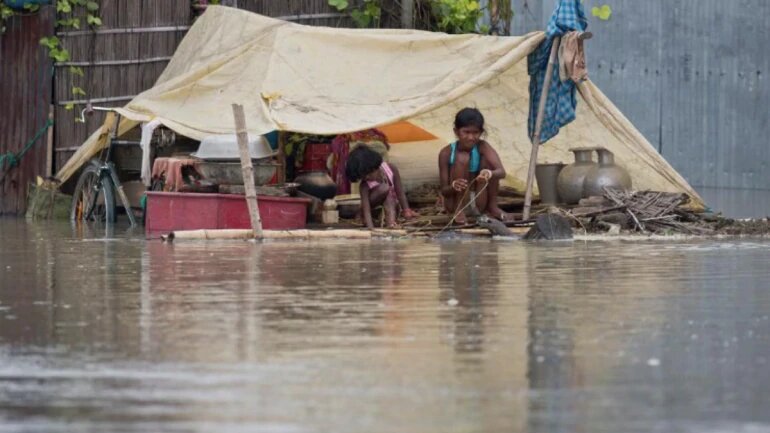 Assam flood: Thousands of people struggle to live after the third wave of flood hit them within two months, nearly 13.26 lakh people of 23 districts affected, death toll rises to 48

Guwahati, July 13: 43-year-old Jubbar Ali and his family are living on the road for the past two months after Assam has been hit by a devastating third wave of flood within two months.

Jubbar Ali – a resident of Murasiti Paam area near Sildubi under Mayanong revenue circle in Assam’s Morigaon district, and his family have spent several sleepless nights in a temporary tent on road.

“We have lost everything in the devastating flood. This is the third wave of flood within two months,” Jubbar Ali said.

Jubbar said that he had taken Rs 1 lakh as a loan from a local bank to cultivate paddy and vegetables in his agricultural land.

“But the floodwaters damaged our croplands. Earlier, we had faced problems due to COVID-19 lockdown. Now flood severely hit us. The floodwaters have completely submerged and damaged our cultivated crops. We are now totally helpless,” Jubbar Ali said.

“We are now struggling to live. Only government’s help will give some relief us,” Jubbar Ali said.

On the other hand, 65-year-old Abbas Ali – a farmer of the same village said that – “We will die following this situation.”

“Everything was destroyed. Flood destroyed our crops, we are now totally helpless,” Abbas Ali said.

Over 35,000 people of Morigaon district have been affected in the third wave of flood.

The floodwaters have submerged over 12,000 hectares of cropland in the central Assam district.

According to the Assam State Disaster Management Authority, nearly 13.26 lakh people of 23 districts of the state have been affected in the current flood.

On Monday, four people drowned in floodwaters in Sivasagar, Bongaigaon, Barpeta and Lakhimpur district and taking the state death toll in this year’s flood to 48.

Over 22,300 people have taken shelter at 126 relief camps, but the flood has forced thousands of people to live on roads, embankments and other higher lands.

Many people are now struggling to live after a devastating flood washed away their homes, damaged croplands.

21-year-old Biswajit Talukdar – a student of 2 no Murakata village in Morigaon district said that, his family has severely hit by flood third times within one and half months.

“I am a son of a farmer. The flood destroyed our croplands. We have now nothing to eat. Not only me and our family, but many other people are also facing similar problems. There is no other work to do due to COVID-19 lockdown,” Biswajit Talukdar said.

2075 villages in 23 districts have been affected in the fresh wave of floods.

However, the flood situation in Assam may turn grim after the Indian Meteorological Department has warned of heavy rainfall at isolated places in Assam and other neighbouring states in the next few days.