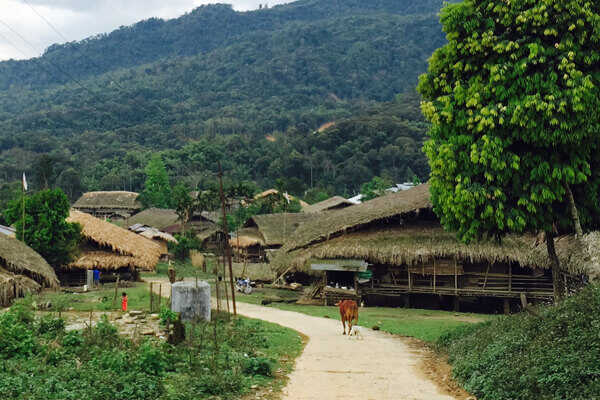 Itanagar, September 25: From the month of May to November, Tabi-Ripo village lying in the foothills of lower Siang is cut-off from the rest of the world since the hanging bridge built-in 1980 has become unsafe for use.

In 1947, in order to facilitate the establishment of a government-run school, villagers of Tabi and Ripo moved from their original settlements to a middle ground and named the merged village as “Tabi-Ripo”. Seventy years later, it has over 300 people.

Bereft of any modern facility like road surface and telecommunication, the villagers go to the nearest town, Koyu for administrative purposes which is just 15 kilometres away. Distance is not the challenge, it is the absence of a 100-metre span bridge across the Hinge river that poses the biggest challenge for this sleepy hamlet.

Till a few years back, the hanging bridge at “Pike “ connected Tabi-Ripo with the next village, Saku Kadu en route to Koyu town “The villagers stopped using this bridge since wire-ropes are precariously holding up and can snap anytime,” said a villager. He added that there has been no repair and maintenance of the hanging bridge. ‘Instead of falling off from the height, we rather risk ourselves wading across the Hinge river even in the monsoon,” he said.

Innumerable petitions and proposals for a bridge have been served to various authorities without any success. Ignored by the government and its representatives, the villagers haven’t seen any senior government functionaries in its village for decades.

It is not only the border villages that are facing the connectivity challenges, but even the villages in the foothills, bordering Assam are also majorly challenged.

Grand projects like Trans-Arunachal Highway, East-West Corridor and SARDP-NE remain a farce if a village such as this one is left out of developmental agenda.