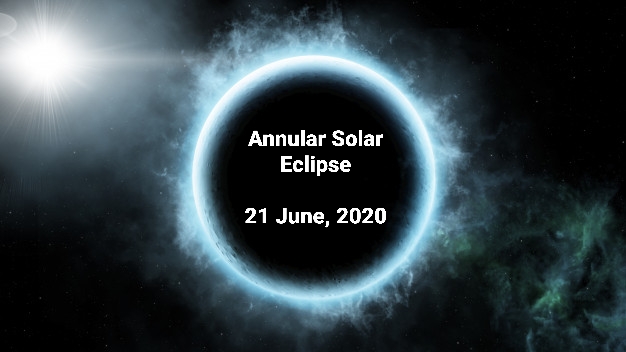 21st of June marks this year’s first solar eclipse, an annular solar eclipse – a phenomenon which will make the sun look like a “Ring of Fire”.

Well, in times of COVID worries, this event will surely bring a diversion, lifting spirits of the sky lovers and the general public.

What is Solar eclipse?

A Solar eclipse occurs when the Sun, Moon and the Earth are in a straight line or the plane of the ecliptic. The moon lies in between and blocks the sun’s rays fully (total solar eclipse), partially (partial solar eclipse) or annularly (annular social eclipse).

The type of solar eclipse we are going to experience on the 21st is the third category or the Annular Solar Eclipse.

When such an eclipse occurs, the moon’s apparent diameter appears to be smaller than that of the sun. Hence, when the moon comes in front of the sun, it’s periphery blocks almost the whole of it barring a little portion which makes the sun look like a “Ring of Fire”.

Summer solstice and places of visibility

June 21 also marks the longest day of the year or what is known as Summer Solstice. And hence making the day a really interesting one. Instead of 12 hours, the day will be 13 hours 31 minutes long. The sun will be over the Tropic of Cancer around noon before starting its southward journey. The Surya Grahan, as a solar eclipse is popularly known as, in India will be best visible at 12.10 PM.

It will start from the Republic of Congo in Africa, passing on slowly from South Sedan, Yemen, Oman Saudi Arabia, Pakistan and then entering northern India. It will then leave the mainland of India, go to Tibet, China Taiwan, and then end in the middle of the Pacific Ocean.

In India, the annular phase of the eclipse will be visible from Rajasthan, Haryana, and Uttrakhand. However, the rest of the country shall also be able to enjoy the beauty in the form of a partial eclipse.

As Dr Debiprosad Duari, Director, Research & Academic, at the M. P. Birla Institute of Fundamental Research, M. P. Birla Planetarium, Kolkata has informed, the path of the eclipse will begin in India at around 10.12 AM near Rajasthan’s Gharsana. The annular phase will begin at around 11.49 AM and last for about a minute ending around 11.50 AM.

He further said, “If you take Kolkata the partial eclipse will start at 10:46 AM. The maximum eclipse will be 12:35 p.m. when the duration of the moon will be covering the sun around 65.5% and then the eclipse will end at 2.17 PM”

According to the Nehru Planetarium, the eclipse will be first visible In Gujarat’s Bhuj at 9,58 AM and end at Dibrugarh in Assam at 2.29 PM.

Yes, the eclipse should not be view with naked eyes as it may result in permanent damage to the eyesight.

Number 14 Welder’s Glass or aluminized mylar filter (Sun Goggles) can be used to look directly at the eclipse.

However, as Dr Debiprosad mentioned, “If you do not have that you can use a pinhole wherein in a cardboard or cardboard box you make a small hole using a small pin and try to send the light of the sun through the hole and project it on a wall or a white paper. You can also absorb this phenomenon through a telescope but not through naked eyes. The sun’s light can be projected again onto a screen or a paper and you can see that happening.”