Home North-East Sikkim will back Centre at All-Party Meet 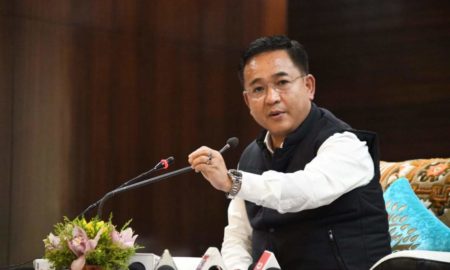 Sikkim will back Centre: Prem Singh Tamang in All-Party Meet

June 20: After Prime Minister Narendra Modi’s all-party meet on Friday which was intended to discuss the Galwan clash, Sikkim Chief Minister Prem Singh Tamang has assured full support to the Centre in the backdrop of the border tensions between India and China.

Sikkim will extend all support to the union government in case of any national emergency, the Chief Minister has assured in the All-Party meet.

The Prime Minister had opened its office for discussion and discourse with leaders of 20 parties across the country on the Galwan Valley face-off between the Indian Army and China’s  People’s Liberation Army which claimed the lives of 20 Indian soldiers and left several injured on June 15.

The Governor of Sikkim, Ganga Prasad paid tribute to martyred jawans who lost their lives during the Indo-China army clash. He offered prayer and lit candles during a Shradhanjali Karyakram held at the state capital in Sikkim.

In the meeting, all parties agreed that national scout cannot be compromised with and the Centre has all of their back.