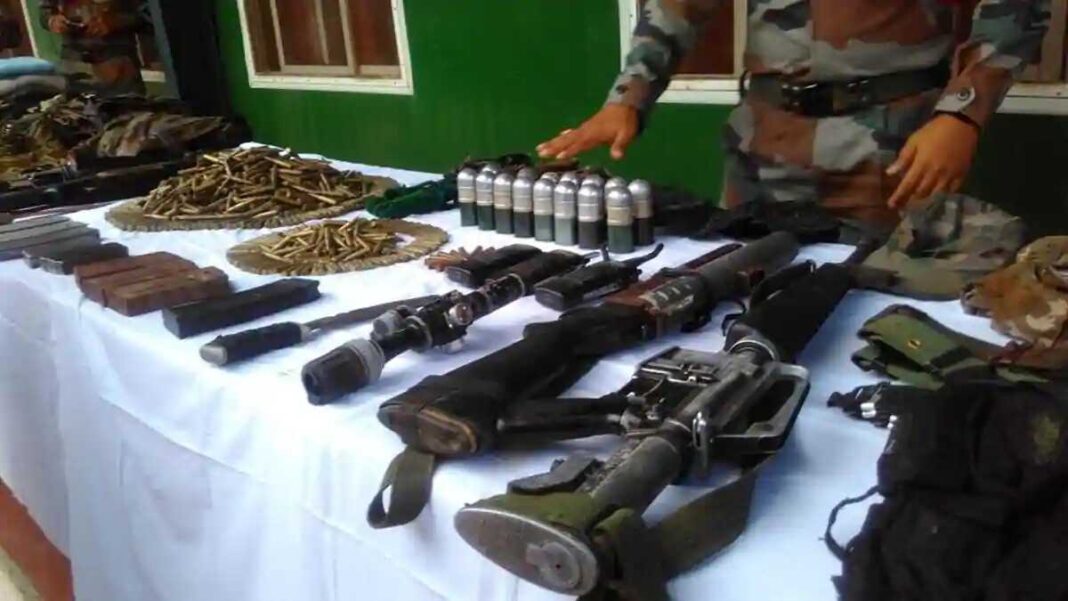 Guwahati, 12th October: Security forces had recovered a large cache of arms and ammunition in Manipur and Nagaland in separate operations.

According to the reports, security forces had unearthed a huge cache of weapons and warlike stores in Manipur Bishenpur district.

Based on a specific input regarding presence of an insurgent of a proscribed group at Nambol Khathong area in Bishenpur district, a joint team of Assam Rifles and Manipur police had launched operation at the area.

The joint team cordoned off the area and carried out a detailed search.

The recovered weapons, ammunition and warlike stores were handed over to Nambol police station for further investigation and legal action.

In a separate operation, the Assam Rifles troops had recovered arms and ammunition in Manipur’s Tengnoupal district along Indo-Myanmar border.

Based on a credible intelligence, Assam Rifles troops launched an operation to apprehend insurgents infiltrating across the Indo-Myanmar border.

While approaching the border area, the troops detected suspicious movement of two persons and upon being challenged, the two suspected insurgents fled the area towards Myanmar.

On carrying out a thorough search of the area, a bag containing two country-made pistols along with seven rounds of ammunition and Myanmarese currency were recovered.

The recovered weapons and other items were handed over to Moreh police station for further investigation.

On the other hand, security forces had apprehended one illegal arms manufacturer at Mhaikam area in Nagaland’s Peren district on Friday evening.

Based on specific intelligence about the presence of arms manufacturer in the general area of Mhaikam, security forces launched an operation and apprehended the person.