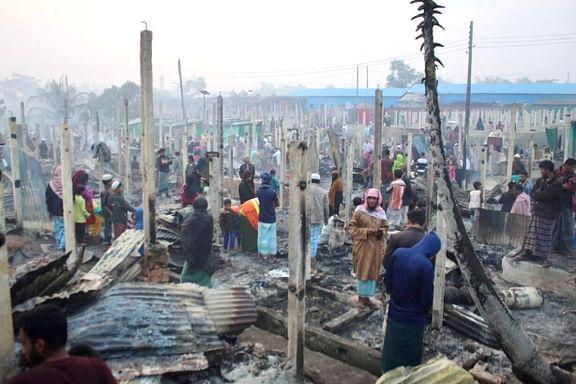 Jan 15: A fire raced through a sprawling Rohingya refugee camp in southern Bangladesh on Thursday, destroying hundreds of homes, officials said. No casualties were reported.

About 3,500 people lost their homes in the middle of winter and the coronavirus pandemic. The UNHCR said more than 550 homes sheltering as well as 150 shops were either totally or partially destroyed in the fire. A community centre is also said to have been destroyed.

The Nayapara camp hosts about 22,500 refugees, of whom about 17,800 are women, children and the elderly.

A fire broke out last night in Nayapara Camp

Volunteers and refugees were the first responders, then the fire dept. rushed in

UN agencies have been on the ground since early Thursday morning, assessing the damage and helping the affected.

This week, a large fire broke out in the #Rohingya camps in Cox's Bazar, #Bangladesh. There were no casualties, but 3500 people were affected and 550 shelters &150 shops were destroyed.

“We are working with our Government and NGO partners, other UN agencies, and Rohingya refugees to help people who have lost their homes and possessions during last night’s terrible fire in the refugee camp at Nayapara,” said Marin Din Kajdomcaj, an official with the UN refugee agency (UNHCR) in Cox’s Bazar.

This is another devastating blow for the Rohingya people who have endured unspeakable hardship for years, Save the Children’s country director in Bangladesh, Onno van Manen, said in a statement.

This fire will have robbed many families of what little shelter and dignity was left to them. About 700,000 Rohingya fled to the camps in Cox’s Bazar after August 2017, when the military in Buddhist-majority Myanmar began a harsh crackdown on the Muslim group following an attack by insurgents.