Guwahati, July 9: 62-year-old Md. Abul Ali and his family are now preparing to move a safer place after he lost everything in soil erosion of the Brahmaputra river.

Abul Ali – a resident of Bhurbandha area in Assam’s Nagaon district had lost his agricultural lands, houses in river erosions.

“I have lost everything. River erosion is not a new problem, we are facing it in the past couple of years. The river swallowed everything. We are now forced to leave this place as the government has not taken any necessary measures to solve this problem. We have now no money. Now only God will help us,” Abul Ali said.

Not only, Abul Ali, there are large numbers of families in Assam who suffer displacement and hardship across the state.

Assam is facing flood and river erosion problems since last six decades and over five lakh families of the state have displaced due to flood and soil erosion by rivers.

According to the Assam government data, the mighty Brahmaputra river has wiped out nearly 4000 sq km – an area larger than Goa, which is about 7.5 per cent of the total area of Assam.

30-year-old Foridul Islam – a local youth of Bohoti NC area in Goalpara district said that more than 2000 families of the area were forced to move to other safer places after they lost their lands, houses due to flood and soil erosions by the Brahmaputra river.

Many school buildings, religious institutions, public properties were destroyed due to river erosions in the area. 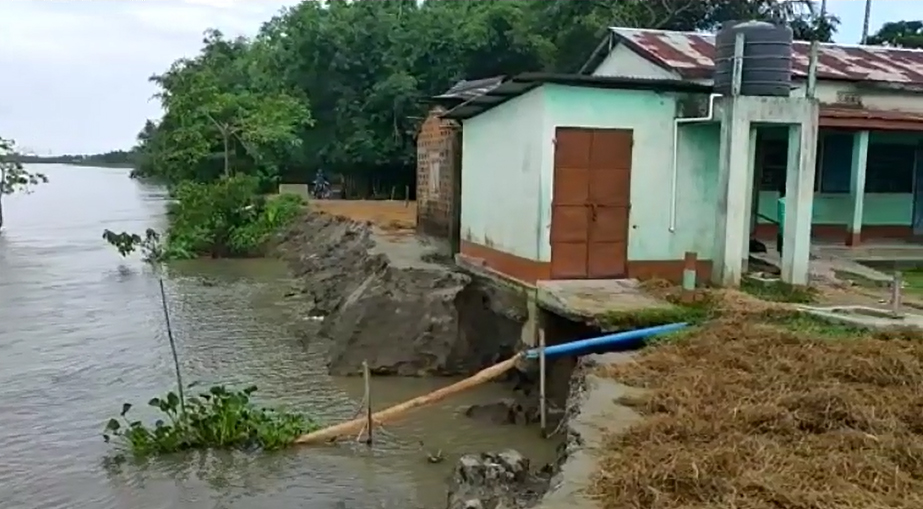 “The Brahmaputra river has eroded thousands bigha of agricultural lands, school building. Over 2000 families were forced to move to other places due to flood and river erosion problems,” Foridul Islam said.

Raju Barua – leader of Assam’s farmer organization Krishak Mukti Sangram Samiti (KMSS) said that over five lakh families across the state have been displaced due to flood and erosion problems.

“We appeal the both centre and state government to help the people who had lost everything in flood and river erosion,” Raju Barua said.

Floods and bank erosion by rivers have become major problems faced by the state.

According to the Assam government, bank erosion by rivers are continued in many districts in the state and due to river erosion, an annual average loss of land is nearly 8000 hectares.

The width of river Brahmaputra has increased up to 15 km at some places due to bank erosion.

Assam is facing a huge economic loss every year due to flood and river erosion.

According to the Assam government data, average annual loss due to flood in Assam is to the tune of Rs 200 crore and thousands bigha of farmland eroded by the rivers each year.

Jayanta Pathak – a professor of Assam Engineering College said that Assam runs on agriculture and thousands of hectares of land are rendered uncultivable due to flood and river erosion and it impacts on the state economy.

“Since independence, we have been trying to manage the flood problems in the state. Now erosion has become even a bigger problem than the flood. Erosion is now becoming a major problem of the state and which was also taken up more or less a national disaster problem at some point of time. But we have not seen that much has been done and probably we have not able to provide as much as flood management which is required to mitigate the erosion problem,” Jayanta Patha said.

On the other hand, Dr Bibhas Sarma – who is working in the field of flood and river erosion problems of Assam in past several years said that the major portions of embankments in the state were constructed in 1960-70.

“Construction of embankment policy was taken in 1954 and we are still going with construction of embankments as a temporary measure. We need storage reservoirs at the foothills of the tributaries which are contributing maximum sediment discharge to the river. If we can’t do that solution is not possible. The government has taken a concept of dredging of the river, but the expert committee said that it is feasible and dredging of the river will not solve the problem because the sediment loads so high and within hours the dredged portion will fill up,” Dr Bibhas Sarma said.

The geographical area of Assam is 78,438 sq km, of which 56,194 sq km is covered by the Brahmaputra river valley and the Barak river valley, along with two hill districts, covered the remaining 22,244 sq km.