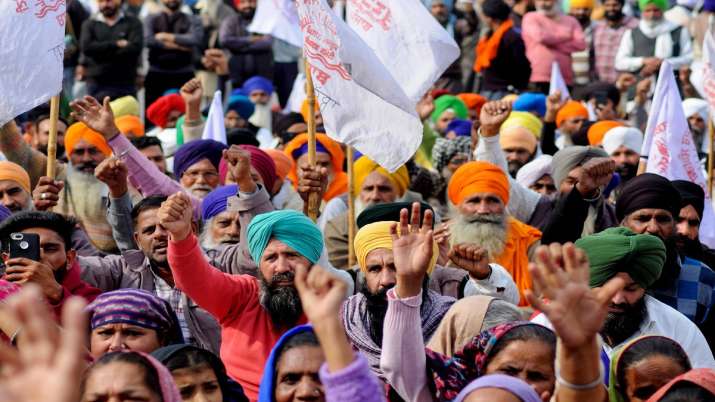 Jan 13: Lohri, one of Punjab’s biggest harvest festivals celebrated on January 13 each year to mark the end of the winter solstice has taken on a political hue at the farmers’ protest sites this time. Farmers are all set to burn copies of the three farm laws, along with the usual offerings, to make their objection clear.

The Sanyukt Kisan Morcha had given a call to burn the laws a few days ago, and a link to download the same was shared through WhatsApp and other platforms. Physical copies too will be circulated.

In a statement, Sanyukt Kisan Morcha said, “Farmers are preparing to celebrate Lohri at all borders of Delhi, where they are sitting on dharna. This time, Lohri will be celebrated by burning copies of the three central farm laws. A large number of farmers from Uttar Pradesh is also joining this movement at Ghazipur border.”

Usually, edible items like jaggery, popcorn, rewri, and sesame are offered to the bonfire during Lohri celebrations, along with some folk songs and dances take place.

At the Singhu border on Tuesday, farmers said while they would celebrate Lohri by burning farm laws, they did not want to partake in a big celebration due to farmer deaths and suicides.

“Initially, we were planning to have a proper celebration with folk songs and dances. But in recent days, with farmers committing suicide, we feel it is not a moment to celebrate. Just yesterday, someone here drank poison on the stage… so the mood is very sombre,” said Lovepreet Singh, one of the volunteers.

Harpreet Singh, a farmer from a village near Chandigarh, also said the focus would be on burning the laws and not so much on the celebration. “When we celebrate Lohri, we sing a song — ‘Ishvar aa, dalidar ja’ — to send away the cold. In the current scenario… the laws are our dalidar. So we will sing the song keeping this in mind,” he said.

“This protest is not just a farmers’ protest, it is a citizen’s protest. The way it is going with the government not looking to repeal the laws, we will also not move. Sirf Lohri nahi, lagta hai baisakhi bhi yahin manani padegi (Not just Lohri, looks like we will have to celebrate Baisakhi here too),” he said.

Baisakhi is another harvest festival of Punjab which is celebrated on April 14 every year.

Despite the political color to the festival, and celebrations subdued, families and relatives of some protesters are likely to arrive on Wednesday.