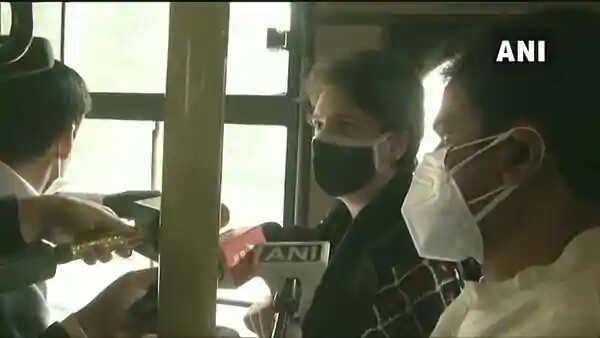 Delhi, Dec 23: Congress general secretary in-charge of Uttar Pradesh Priyanka Gandhi Vadra and other senior party leaders were taken into preventive custody by the Delhi Police after they tried to march to the Rashtrapati Bhawan to meet President Ram Nath Kovind.

The detained leaders were part of a delegation, led by former party president Rahul Gandhi comprising Congress Working Committee (CWC) members and Members of Parliament, that was going to meet the President with 20 million signatures collected in the past three months against the three new farm laws enacted in September this year.

“We are living in a democracy and these are elected MPs. They have the right to meet the President and they should be allowed. What is the problem with that? The government is not ready to listen to the voices of lakhs of farmers camping at borders,” Priyanka Gandhi said.

“Any dissent against this government is classified as having elements of terror. We are undertaking this march to voice our support for the farmers,” she added.

“Sometimes they say we (Congress) are so weak that we don’t qualify to be the opposition and sometimes they say that we are so powerful that we have forced lakhs of farmers to camp at Delhi borders for a month. They should first decide what we are,” Priyanka Gandhi said.