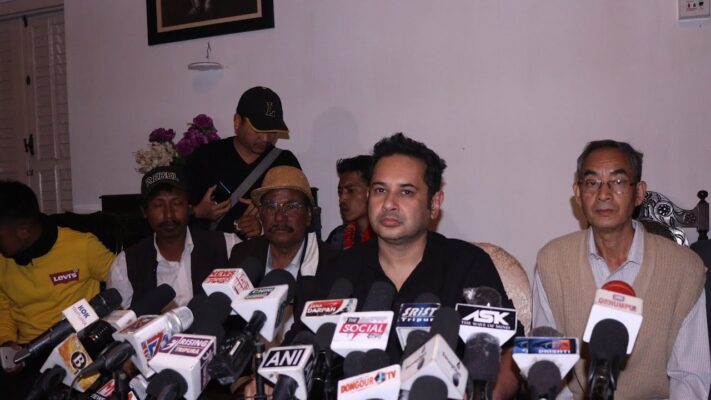 i guess the media outside Tripura will not see this crowd because it will make many uncomfortable ! we may not be in the right side of the system but at least our voices should be heard in a democracy 🙏 https://t.co/ThO4dXJDCs

Seventeen months after he resigned as the Congress state president, Tripura royal scion Pradyot Kishore Manikya has recently announced his new political demand of ‘Greater Tipraland’, which he claims would serve the interest of tribals, non-tribals, Tripuri tribals staying outside Tripura, even those outside India in Bandarban, Chittagong, Khagrachari and other border adjacent areas in Bangladesh.

‘Greater Tipraland’ is essentially an extension of the ruling tribal partner Indigenous Peoples Front of Tripura – IPFT’s demand of Tipraland, which sought a separate state for tribals of Tripura.

The new demand seeks to include every tribal person living in an indigenous area or village outside the Tripura Tribal Areas Autonomous District Council (TTAADC) under the proposed model.

However, the idea doesn’t restrict to simply the Tripura tribal council areas, but seeks to include ‘Tiprasa’ of Tripuris spread across different states of India like Assam, Mizoram, etc. as well, even those living in Bandarban, Chittagong, Khagrachari, and other bordering areas of neighbouring Bangladesh.

When asked if his demand for ‘Greater Tipraland’ seeks to re-draw territorial boundary lines of Tripura or the proposed state including parts of Assam, Mizoram, and Bangladesh, where Tripuris were claimed to live, the royal scion didn’t specify the issue but answered if successful, Greater Tipraland would ‘help’ Tripuris in need of assistance in those areas.

Pradyot has said details of the demand would be placed before the central government for dialogue if all indigenous tribal leaders of Tripura including himself is invited for talks. He has claimed the call of Greater Tipraland’ rose due to unfulfilled demands of revising NRC in Tripura and opposition to CAA in the past.

Is it similar to Greater Nagalim?

When asked if his call resembles the demand of ‘Greater Nagalim’ floated by the rebel Naga outfit – NSCN (IM) – now in peace talks with the central government, Pradyot Kishore has clarified Greater Tipraland is not in any way a rebel subject. “Our demand is a democratic issue and we shall proceed accordingly”, he said.

With Pradyot’s new political manoeuvring, TIPRA has emerged as the single-largest tribal political party of Tripura.

The organization was announced as a new political party and rechristened Tipraha Indigenous Peoples Regional Alliance with the same acronym.

Hours later, BJP’s ruling alliance partner IPFT joined an alliance with Pradyot Kishore, saying they feel the demand for a ‘Greater Tipraland’ aligns with their demand of ‘Tipraland’ – a proposed separate state for tribals of Tripura floated in 2009 and the main poll issue that catapulted them to victory in the 2018 assembly election.

The next day, the Indigenous Nationalist Party of Twipra (INPT), one of the oldest surviving tribal regional parties of Tripura, supported TIPRA and said its demand for Greater Tipraland matches with one of their primary and old demands.

Explaining their support, INPT general secretary Jagadish Debbarma said, “There is a difference between Tipraland and Greater Tipraland. Timbaland is restricted to ADC areas only. If it is required to form a separate Tipraland, then the state capital, the Royal abode, and all the indigenous-dominated habitats need to be included in it. We have been saying the same for a long time. So, we support Greater Tipraland”.

INPT was, however, a vocal critic of IPFT’s Tipraland demand before the 2018 state assembly polls.

Formed on March 12, 1989, with Dhananjoy Reang as its self-styled chairman, NLFT went through a series of splits. A small group led by Biswamohan Debbarma is the only active wing of the outfit. ATTF was formed in 1990; the group is inactive now.

TNV surrendered arms as per a peace accord with the then Prime Minister Rajiv Gandhi in 1988.

Tripura Upajati Juba Samiti (TUJS), INPT, now-defunct National Conference of Tripura (NCT) and few other tribal parties became active in the subsequent phase with demands of ADC empowerment, a demand that the then ruling CPIM shared, although differing on almost all other fronts.

Fast forward to 2009, IPFT emerged under veteran tribal ideologue NC Debbarma, who is now revenue Minister in the Biplab Deb cabinet. This party reiterated the demand for a separate land for tribals but in a democratic manner.

It claimed a separate state could alone alleviate problems faced by Tripuri tribes and fought the 2018 assembly polls on these lines.

Pradyot’s new demand for Greater Tipraland is a major step forward after IPFT’s statehood demand. However, it’s the latest in the line of his ethnic agitations after ‘Puila Jati Ulo Party’, (first community, then party), a slogan he raised to unite people from both tribal and non-tribal behind ethnic identity in 2019 when he stated Congress chief.

He had clarified that anyone staying in Tripura is a member of ‘Tiprasa’ or Tripuri and that includes both tribals and non-tribals. Soon after resigning from Congress, raised another slogan in 2020 saying ‘Puila Jati Ulobo Jati’, meaning ‘community first, the community at the end as well, appealing people to come together against the Citizenship Amendment Act (CAA), cutting across political lines.

He also moved two petitions with the Supreme Court seeking to implement NRC revision in Tripura and opposing the CAA.

What does it mean for Tripura’s politics and coming ADC polls?

Though seat-sharing between the partners is yet to be finalized, the TIPRA-IPFT combine seems to have emerged as a major challenger to both the CPIM, which last held the ADC for over five consecutive terms and the BJP, which is now ruling Tripura.

TIPRA leaders have expressed strong confidence in getting a favourable mandate in the tribal council polls, scheduled to be held within May 17 this year.

The polls, which were supposed to be held in May last year, were deferred due to the COVID-19 pandemic.

The council’s administration was handed over to Governor RK Bais for six months, a tenure which was extended once in November as the corona wave continued.

The state government stated before the High Court of Tripura during the hearing of a petition regarding the postponed polls that it would conduct the poll process before May 17, 2021.

Barring BJP, CPIM, Congress, and Trinamool Congress’s tribal wings, Pradyot has now got nearly all tribal parties under his wings. He also shares a ‘friendly relation’ with Tripura Chief Minister Biplab Kumar Deb, whose party earlier approached Pradyot with proposals of a Rajya Sabha seat earlier, albeit in vain.

Tripura ADC is spread across 7,132.56 square km and covers nearly 68% of the state’s geographical area. However, tribals comprise only one-third of the state’s population of 37 lakh people.

70 per cent of land under the TTAADC is covered by hills and forests and most inhabitants are prone to ‘jhum’ (slash and burn) cultivation. Apart from the tribal council’s 28 seats, 20 seats in the state legislative assembly are reserved for Scheduled Tribe (ST) candidates while tribal voters are a deciding factor in at least 10 more seats.

As partners of TIPRA have announced their alliance would continue till 2023 assembly elections and beyond, Pradyot certainly seems to be inching towards a huge advantage in the state’s tribal politics and coming ADC polls, with a lion’s share of tribal supporters on his side.

How have others reacted?

While the ruling BJP has claimed TIPRA’s alliance with its partner IPFT would not disturb the duo’s internal understanding of running the government, the party also said the tribal partner never discussed such a move with them.

Chief Minister Biplab Kumar Deb declined to comment on the political prospects of Pradyot’s move but said CPIM or Congress have no need to be happy with it.