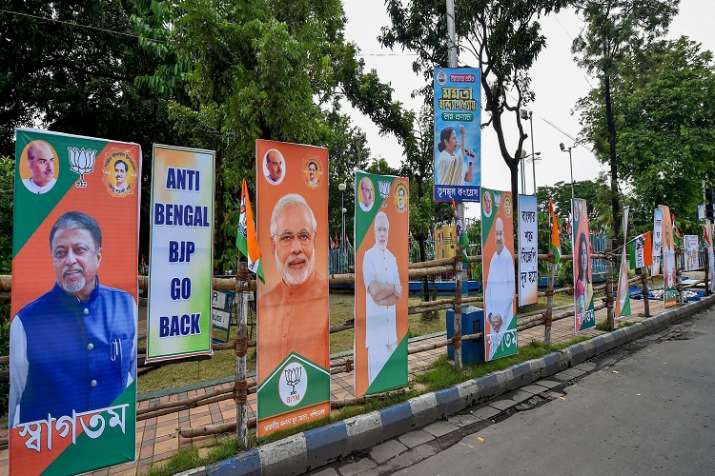 Bengal, 6th November: Poster war began between TMC and BJP in Bengal over Amit Shah’s visit to Matua Community stronghold on Friday. Union Home Minister Amit Shah is on a two-day tour to West Bengal but today would be the second day with a lot more political action. He will be visiting areas on the fringes of Kolkata and North 24 Parganas, will be having lunch with Matua community representatives and there will be a lot of political reading into it too.

The Kestopur area of Kolkata is significant to the Matua community. It has a stronghold of about 8 to 10 seats and across this district of North 24 Parganas. There is also a political war raging on the posters as well as the flags of political parties.

On one hand, there are posters of Home Minister Amit Shah and on the other, there are posters of Chief Minister Mamata Banerjee. Amidst all that, there are also flags of TMC and BJP that have been almost placed overnight to ensure that every political flag of every party especially the two arch-rivals in Bengal is there back to back next to each other.

Home Minister Amit Shah will be having lunch with the Matua community and will also be visiting their temple, it’s also the vote bank politics that continues especially with the focus on Assembly 2021 in Bengal.

Relative of the family with which Amit Shah is going to have his lunch share his happiness and discuss the problem they are facing.

Answering the question asked about the kind of mask he wore while welcoming the Minister.

“It is written ‘Jai Haribal’ which is our slogan and its speciality are that people of Matua community who reside here, have all come from East Bengal. So in West Bengal, the kind of control that Mamata Banerjee’s government is doing so for that what Narendra Modi is doing for us common people of Matua community is he will give us a certificate under CAA and we are very happy about it. This is the speciality of the mask, ‘Jai Haribal’ is our slogan and we all say it together,” Raju Bar added.