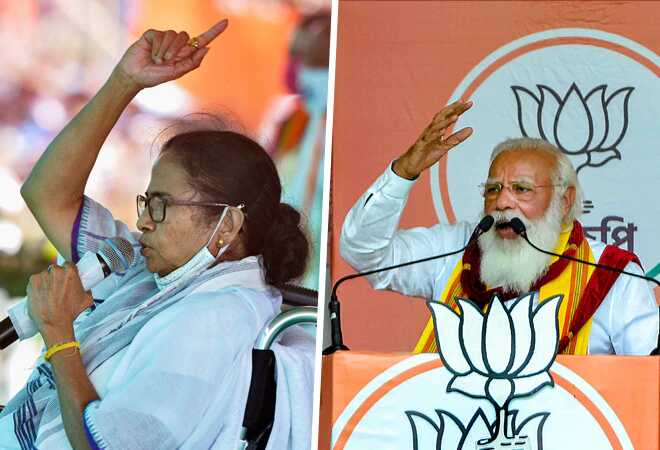 Bengal, April 6: Calling PM Narendra Modi a “liar“, Mamata Banerjee said, “PM Modi is a liar. At each meeting, he taunts me and lies.” West Bengal Chief Minister Mamata Banerjee on Tuesday addressed a rally in Cooch Behar ahead of phase 4 polling in West Bengal and attacked the prime minister, saying he taunts her at meetings.

Both the parties — the BJP and the TMC — are trying to woo the Rajbongshi community in Cooch Behar with a Narayani battalion. While Mamata Banerjee said that her government has formed it, the Centre rejected the claims, saying she’s “bluffing voters by quoting an RTI response“.

Hitting back at Trinamool Congress chief Mamata Banerjee for dismissing the Bharatiya Janata Party’s claim of victory, Prime Minister Narendra Modi on Tuesday said that his party was sure to win the Bengal polls not because it was God but because its leaders were engaged in public service.

“Didi [Mamata Banerjee] has been asking, “Is BJP God that it already knows it is winning polls?” I want to say to her that we are normal people engaged in the service of the public. I want to tell the people that I will return your love with interest in the form of development,” PM Modi told the public at a poll rally in Cooch Behar, West Bengal.

The BJP and TMC are locked in a fierce poll battle for the 294 seats in the Bengal Assembly. The voting in the state is being conducted in eight phases. The first two phases were held on March 27 and April 1. The third phase of voting is currently underway.

Also Read: Will win Bengal with one leg, Delhi with two: Mamata Banerjee

The BJP leaders have claimed that the high voter turnout during the first two poll phases is proof that the saffron camp is headed for victory. However, the TMC has dismissed the claim.

Addressing the poll rally in Cooch Behar on Tuesday, PM Modi reiterated the claim and said, “In the last two rounds, large numbers of people have come out of their homes and stood in long lines to cast their votes for the BJP.”

“There is very good voting turnout today as well. Bengal is witnessing a BJP wave which will sideline the fear of didi and her goons,” he said.

PM Modi said that the TMC lost the election the day Mamata Banerjee played ‘Khela‘ (game) at the polling booth in Nandigram.

Mamata Banerjee, who has contested polls from Nandigram had camped outside a polling booth on April 1 claiming election malpractice by security officials. The EC has since dismissed the allegations.