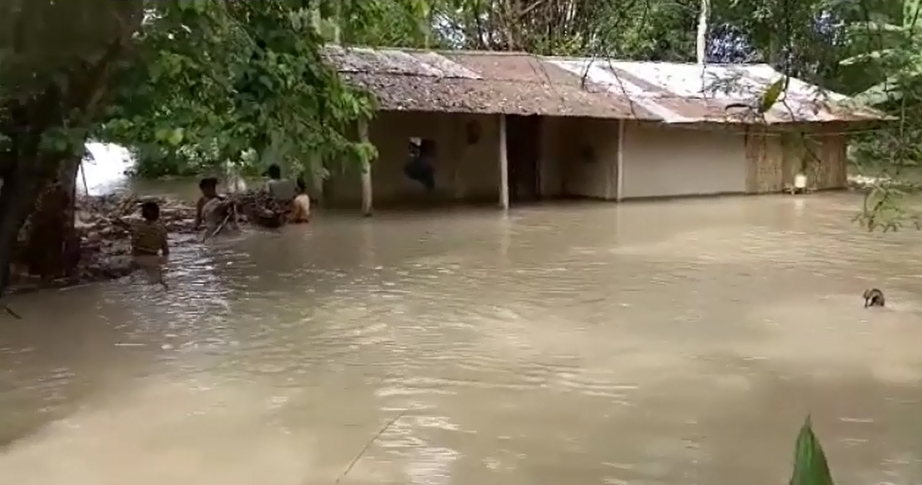 Guwahati, June 23: Nearly 30,000 people of four districts of Assam have been affected in the second wave of the flood as the water level of Brahmaputra river and its tributaries are rising following incessant rain in the past couple of days in many parts of the state.

One person drowned in floodwaters at Nazira area in Sivasagar district and the total death toll in the state has risen to 11 so far.

According to the Assam State Disaster Management Authority (ASDMA), the water level of Brahmaputra river is flowing above danger level mark at Neamatighat in Jorhat district, while Dikhow river flowing above the danger level at Sivasagar, Disang at Nanglamuraghat in Sivasagar district, Dhansiri river at Numaligarh in Golaghat district and Jia Bharali river at NT Road crossing in Sonitpur district.

Nearly 30,000 people of Dhemaji, Sivasagar, Jorhat and Dibrugarh district have been affected in the current flood and the floodwaters submerged over 3600-hectare cropland in the flood-hit districts.

Over 12,000 people of 33 villages have been affected in Sivasagar district and many people have taken shelter in relief camps and higher lands.

On the other hand, over 11,500 big and small domestic animals have affected in the second wave of flood.

The NDRF, SDRF teams had rescued over 300 people from the flood-affected areas in Sivasagar and Dhemaji district in last 24 hours.