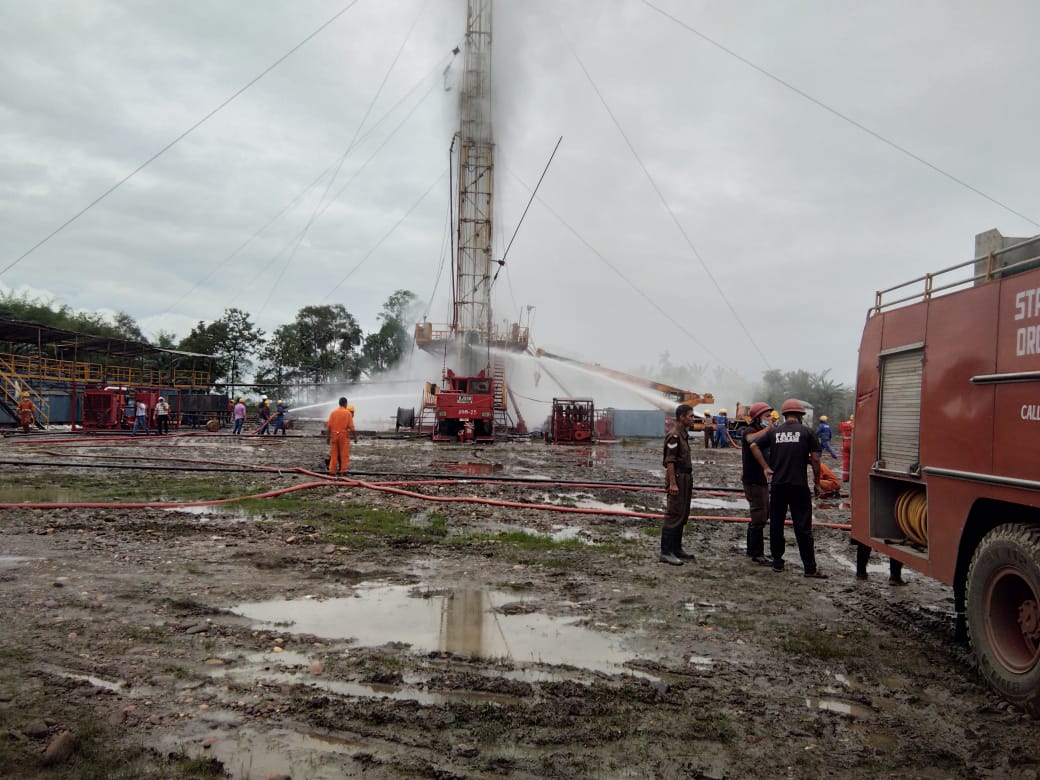 Guwahati, June 3: Baghjan – about 43 km away from Tinsukia town Assam, where the gas well blow out occurred on May 27 – is close to Maguri-Motapung wetlands – just one kilometre from the oil field where the blow out at one of the OIL Rigs at OIL Well no 5 Baghjan in the Motapung Maguri Beel area happened.

According to the Oil India Limited, it releasing natural gas in an uncontrolled manner since May 27 blast.

Apart from natural gas, condensed oil leaking is also continued and all the nearby areas have badly affected.

Fish, Gangetic dolphin, birds, some cattle have died in the area following a blow out of the gas well.

Locals have found the carcass of Gangetic dolphin, numbers of fish in a lake close to Baghjan oil field.

A resident of Baghjan said that, numbers of fish, cattle, goats have died and grasslands, vegetables and the entire environment have very badly affected in the area.

“We demand the Oil India Limited to give compensation to every household who are very badly affected,” the resident said.

Given the impacts on the environment, forests, wildlife and ecology following the blow out of Oil India Limited gas well, Assam Forest department on Tuesday has constituted an Expert Committee to assess the impact of the blow out of the OIL Rigs at OIL Well No. 5 Baghjan and suggest measures for immediate necessary action.

The Assam state Forest department order copy stated that, since a lot of water jets are being thrown at the well at the gushing natural gas to prevent the possibility of fire, the formation of aerosol with water molecules and natural gas particles is taking place and a thin oily layer is being formed on the water surfaces in the surrounding area. Its other impacts on the environment, forests, wildlife and ecology need to be assessed immediately to protect habitat and entire Biodiversity of the National Park including humans and their livestock within (forest village) and in the fringe area of the National Park.

“The Committee will assess the impact of the blow out of the gas well in Assam and suggest measures for immediate action,” Sailen Pandey said.

The Expert Committee will submit their report by June 10.

The state Forest department order copy also stated that the Expert Committee shall be restricted to the Dibru Saikhowa NP including its Buffer Area, the fringe areas falling in the zone Of the influence of the NP, down Stream up to Kaziranga National Park and ESZ of Dibru-Saikhowa NP and adhere to the advisories issued by Govt. of India and Govt. of Assam given COVID/19. The Experts may undertake their field visit in smaller subgroups of 2-3 members as a precautionary Step during COVID/19 observing all social distancing norms.

Assam Chief Minister Sarbananda Sonowal on Tuesday telephoned Union Minister for Petroleum and Natural Gas Dharmendra Pradhan and requested his help in getting foreign experts in plugging a leak in the well of Oil India Limited at Baghjan leading to spewing of natural gas in the air.

OIL’s Baghjan oil well caused rupture on Wednesday morning causing spewing of gas into the environment. Though best of the efforts have been put in place by the crisis management team to control the release, gushes of natural gas have been oozing unrelentingly.

Following this, Assam Chief Minister Sonowal called up Union Minister Pradhan, briefed him about the situation and requested him to take up immediate steps like taking the help of foreign experts in stopping the release.

Further, given the cascading effect of the incident on the surroundings and the residents in fringe areas, Sonowal also requested the Union Minister for announcing adequate compensation of the victims.

Pradhan assured the Chief Minister of taking positive steps including bringing experts from Singapore to plug the leak. He also informed Sonowal that a Joint Secretary from Union Petroleum Ministry has also been directed to rush to the site to take stock of the situation.

Meanwhile consequent upon Sonowal’s request, the Joint Secretary Petroleum Ministry has already reached Assam and an expert team from Singapore will reach the state on Wednesday to lend its expertise to plug the leak.