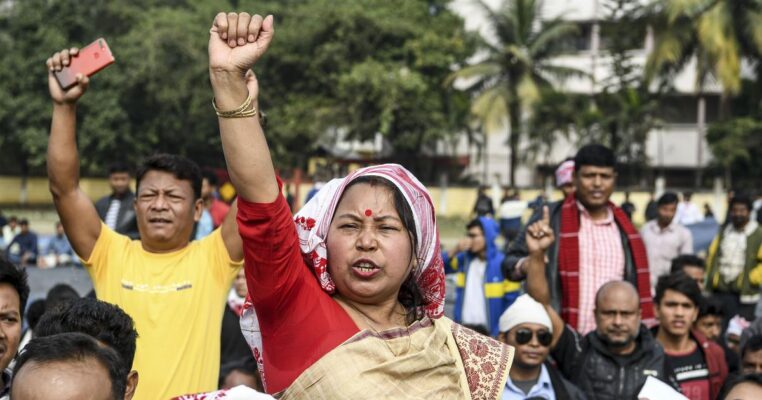 Assam, Feb 4: Two Anti-CAA parties have been formed in Assam to oppose the Citizenship (Amendment) Act plans to contest assembly elections together in the state due in April-May this year. The Assam Jatiya Parishad (AJP) and Raijor Dal (RD) plan to include more parties in their alliance to take on the ruling Bharatiya Janata Party and Congress-led alliance.

AJP president Lurinjyoti Gogoi on Thursday met RD chief Akhil Gogoi, who has been under arrest since December 2019 for his role in the anti-CAA protests, at the Guwahati Medical College Hospital, where he is undergoing treatment.

“This is the first time we have met after the formation of our parties and election to our posts. Akhil Gogoi has been kept in detention for long in an undemocratic manner and should be released immediately,” said Lurinjyoti Gogoi after the meeting. “We have been saying since our party’s inception that both AJP and RD would contest the polls together and after the meeting, we can tell people of Assam that the decision for a tie-up is final. An official announcement on this would be made soon.”

Lurinjyoti Gogoi said the regional parties would be able to overthrow the ruling BJP-led combine as well as negate the influence of the Congress, which has tied up with All India United Democratic Front, Anchalik Gana Morcha, and three Left parties.

“Some are trying to portray the next polls as three-cornered. But I want to make it clear that it will be a two-sided contest between regional forces against national and communal parties,” he said. “Like us, Akhil Gogoi has also been saying that there is no alternative to regional parties, and to ensure that there is no division in the regional votes, we needed to come together.”

Lurinjyoti Gogoi said they will also have a tie-up with the Autonomous State Demand Committee for seats in the two hill districts of Karbi Anglong and Dima Hasao.

Talks were also underway with the Bodoland Peoples’ Front, which is a part of the ruling coalition in the state. The front is expected to part ways with the BJP after the latter tied-up with the United Peoples’ Party Liberal for the Bodoland Territorial Council polls in December.

Also Read: Some Bangladeshi Muslims in Assam identify themselves as ‘Miya’: Himanta

All Assam Students Union and Asom Jatiyatabadi Yuva Chatra Parishad, the two student organizations that played a key role in the anti-CAA protests in December 2019, have formed the AJP.

Krishak Mukti Sangram Samiti, a peasants’ body that too spearheaded the protests against the legislation, has formed the RD.

The CAA seeks to fast-track citizenship to non-Muslims from Afghanistan, Bangladesh, and Pakistan. It triggered widespread protests in Assam amid concerns that it could encourage a fresh wave of migrations from Bangladesh and threaten the livelihoods of indigenous people. The protests in Assam claimed five lives.