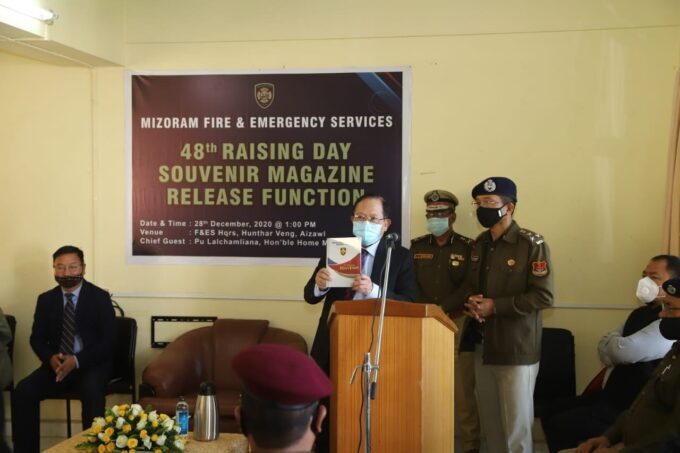 Mizoram, Dec 29: Mizoram Home Minister Lalchamliana launched the ‘souvenir magazine’ on the occasion of the 48th-anniversary celebration of the Fire & Emergency Services at the recreation hall of the Headquarters Office.

Addressing the people during the program Lalchamliana said “it was joyous to witness the 48th anniversary of the Emergency Services department and relayed his best wishes to all the staff and employees of the department for the festive season.”

The minister praised the hard work and dedication of the Fire & Emergency services workers and appreciated those who had received Service Medals for their hard work and sacrifice also appreciate for releasing the souvenir magazine.

He said “once the project proposals have been approved, they plan to construct new buildings and procure additional vehicles for the fire& emergency services department. We have not been able to set up a fire station in the newly opened districts due to financial constraints.”

Lalchamliana further advised the staff to be vigilant and keep away from the use of substances, he also advised the public to take precaution against unnecessary and accidental fires.

The journey of the Fire & Emergency Services started in Mizoram on September 1, 1972, by a few people from Assam, and was known as the Fire Service Organisation. It was under the care of the Superintendent of Police.

In 2008, a Director post was appointed and it became a separate unit from the police department. The Mizoram Fire Service Act was passed in 2013 and rules were framed which was approved by the Mizoram government in August 2019. Currently, there are 14 fire stations in Mizoram.