Home North-East Meghalaya: Protests over ‘delay’ in implementation of ILP 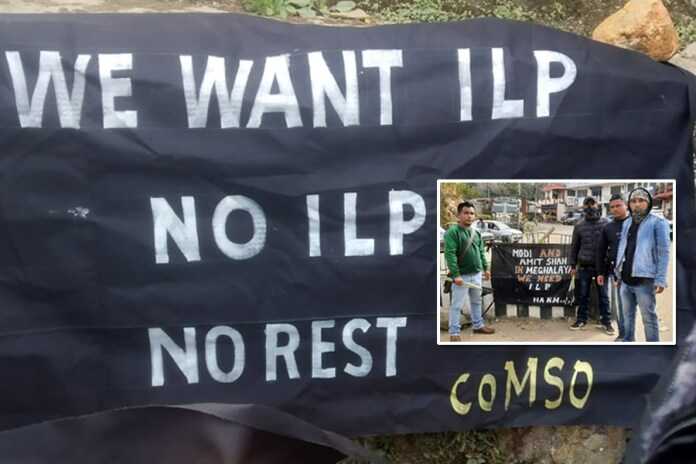 Rallies were taken out in the state capital and the districts with the protestors carrying black flags.

Shopkeepers downed their shutters when the pro-ILP activists were passing through the roads in Iewduh and Khyndailad areas, distributing black flags to commuters.

The movement of vehicles was also disrupted for some time. However, there was no law and order problem so far.

To visit the ILP-regime states, outsiders, including people from other states of the country, need to take permission. There are also protections for locals with regards to lands, jobs, and other facilities.

The state assembly had last year unanimously adopted a resolution urging the Centre to implement ILP in Meghalaya.

BJP is part of the National People’s Party-led Meghalaya Democratic Alliance (MDA) government in the state.

The Confederation of Meghalaya Social Organizations (CoMSO) had announced a series of protests beginning with Friday’s black flag protest and a sit-in protest on December 4 over the Centres ‘delay‘ in implementing ILP in the northeastern state.

“We are unhappy with the way the Central government has been treating us. While other northeastern states have been granted ILP, we are left waiting. These are signs of step-motherly treatment towards us,” CoMSO secretary Roy Kupar Synrem said.

He also warned the state government that if the ILP is not implemented in the next few months, there would be more protests across the state.

The protesters have also demanded that 60 MLAs and three MPs of the state (two Lok Sabha MPs, one Rajya Sabha MP) should visit Delhi and organize a sit-in demonstration at the national capital to ensure that the ILP is granted for Meghalaya.

The Inner Line Permit regime is applicable under the Bengal Eastern Frontier Regulation, 1873.

In terms of Section 2 of the Bengal Eastern Frontier Regulation, 1873, citizens of other states require ILP for visiting these states.