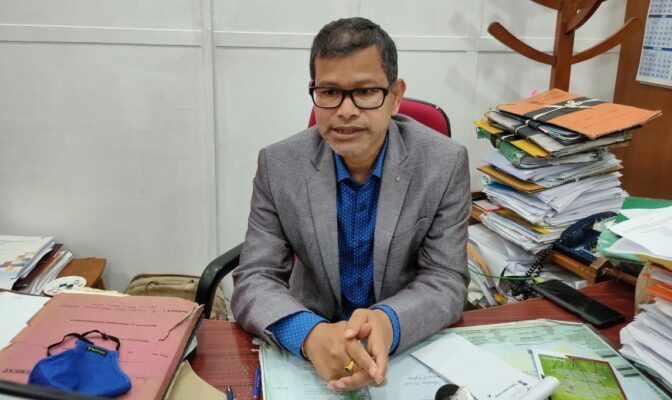 Meghalaya, Jan 25: The Meghalaya BJP has demanded the resignation of state home minister, Lahkmen Rymbui for failing to curb illegal coal mining in the state, and sought an independent inquiry into the deaths of six labourers in a coal pit in the Rymbai Elaka of East Jaintia Hills last Thursday.

“We from the party strongly demand that the state home the minister should resign and let an independent inquiry take place to find out the facts,” state BJP president, Ernest Mawrie said.

Referring to the tragic incident where six lives were lost, Mawrie said, “The government has misled the MLAs in the Assembly constantly as it has been stating that there is no illegal mining or transportation of coal… and now six precious lives have been lost in the rat-hole mine”.

Calling the statement of the state government that the labourers had “gone there to do some other mining” a bluff, the state BJP the president countered, “When the relative of the victim has given a statement that for the last six months his brother has been working in the coal mine doing box cutting, how can the government claim that they were not mining coal”.

He further said the state government could not just take it easy and must order an inquiry using “own” administrative powers and people to conduct the probe.

“We don’t know what reports will they bring out and so we want an independent inquiry to be conducted,” Mawrie said.

Recalling that the issue of illegal coal mining and transportation had been raised by the party several times before but never paid heed to, the BJP leader said, “The people are the best judge. They have seen the statements we have made before the media and it is not that there is no fact”.

“Six lives have been lost again…what more proof do they want?” he questioned.

The incident brings back memories of the mishap in December 2018, when at least 16 miners died in a submerged rat-hole coal mine in the district’s Ksan area.

RTI activist and civil society leader, Agnes Kharshiing on Sunday stated that the death of six labourers in a coal pit in the Rymbai Elaka of East Jaintia Hills was a reflection of the rampant illegal coal mining in the state which the government had been “protecting” for so long.

Stating that she will write to the National Green Tribunal (NGT) on the issue, Kharshiing said, “After the NGT orders during one year, all the extracted coal has been depleted, while those being transported now are fresh coal. We are trying to gather whatever we can and will inform the NGT”.

Accusing the state government of trying to cover the truth, Kharshiing said, “A lot of illegal coal-laden trucks are plying every night and not following the NGT guidelines. The very person who attacked us is also getting the challan. For them, it is just money and they are not serious about checking the illegalities”.

On the deaths of the six labourers, Kharshiing said, “The people who died were engaged in coal activity. Coal mining is still on and the government knows everything”.

Pointing out that people cannot speak out and the media cannot go to the places where mining activities were happening, Kharshiing asked, “Who is allowing such things to happen? We have a government that should protect people and we can’t even go to such areas where illegal activity is happening… that means the government is protecting”.