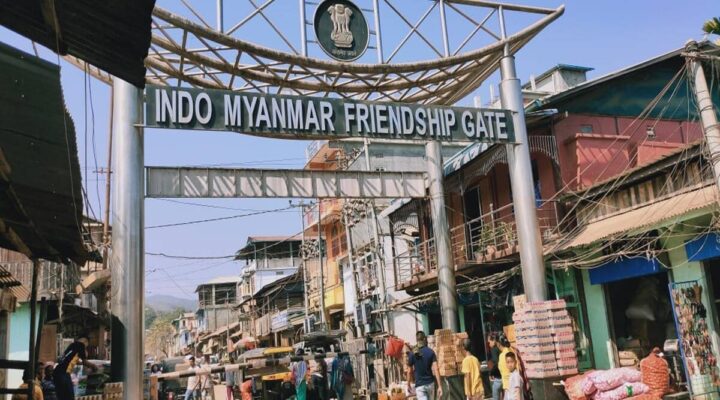 Imphal, March 27: At least three Myanmar nationals with bullet injuries were brought to Manipur capital Imphal for treatment. The injured are reportedly residents of Tamu town, Myanmar, about 5 km away from the last Indian border town of Moreh in Tengnoupal district.

It is not yet clear how the injured Myanmar nationals crossed over to the Indian side. Indianexpress.com made several attempts to contact the district authority of Tengnoupal district but could not be reached.

The security crackdown in Myanmar following the February 1 military coup is witnessing many people fleeing across the border into India.

Initially, the Myanmar nationals who crossed over to Manipur were brought to Jawaharlal Nehru Institute of Medical Sciences (JNIMS), Imphal Friday morning.

However, one of the injured, Naye Yoon, was shifted to the Regional Institute of Medical Sciences (RIMS), Imphal.

According to a medical report of Moreh hospital, Phuyoo had sustained a bullet in the abdomen; Nyae Yoon in the chest and right knee, and Nay Nay Thoo has a bullet injury on the right side of his back.

The medical report further stated that the injured were referred from Tamu hospital for further treatment.

On March 9, 2020, Manipur sealed the Indo-Myanmar gate number one and two at Moreh in the wake of the increased number of confirmed cases of Coronavirus infection in the neighbouring country.

Subsequently, Myanmar also sealed its border since the pandemic.

On March 3, 2021, the chairman of District Administration, Tamu Myanmar Kyaw Win Oo, in a letter to the deputy commissioner, Tengnoupal, informed that the Indo-Myanmar friendship gates will remain closed till March 31.