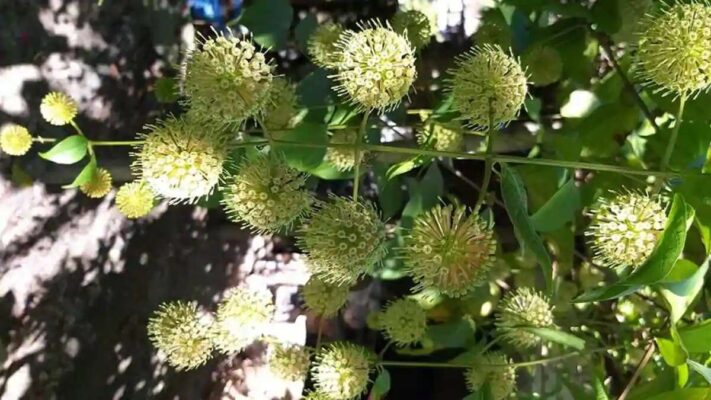 Manipur, Jan 4: A flower documented only as a dried specimen in India has been photographed for the first time at Nambol of Bishnupur district in Manipur.

The flower clicked in Manipur, identified as Smooth Uncaria (Uncaria laevigata) and has been recently clicked by Dr. Kh Shamungou, an environmentalist at his courtyard garden at Nambol, 18 km south of Imphal.

“Yes, this may be the first photograph of a living plant of this species in India. I could not find any picture of the living plant on the Internet except one site,” said Tabish Qureshi of one of India’s most popular flower websites www.flowersofindia.net.

Botanist Dr Nidhan Singh of IB (PG) College, Panipat, identified the genus, the first part of the botanical name of the flower (as Uncaria).

“Nidhan Singh said it is a species of Uncaria. I then searched and identified it as Uncaria laevigata after comparing it with the known species of East Himalayas,” said Qureshi, a physicist at Jamia Millia Islamia, New Delhi.

According to www.flowersofindia.net, which currently has a repository of over 6,000 identified flowers, Smooth Uncaria is a large climber with elliptic leaves and prominent hooked spines. Flowers are stalkless, flat-faced, and hairless with a narrow tube.

The plant is found in forests at altitudes of 600-1300m from northeast India to China and South Asia. It flowers during May-November, the website said.

Smooth Uncaria is a commonly used in traditional Chinese medicine to treat diseases of the cardiovascular and central nervous systems like hypertension, light-headedness and numbness.

When contacted, Dr. Shamungou said, “I named the flower Ningol Khoidumlei as it looks like Kabok Khoidum (a local snack made of puffed rice with jaggery) and it flowers during the Ningol Chakouba festival season (October-November).”

There are also reports of some people spotting the Smooth Uncaria in Senapati district of Manipur. “I think I have seen it (Smooth Uncaria) at Senapati,” says Homen Kangjam, the farm manager at Krishi Vigyan Kendra, Hengbung.

According to the Botanical Survey of India present there are about 44,500 species of plants already identified and classified.