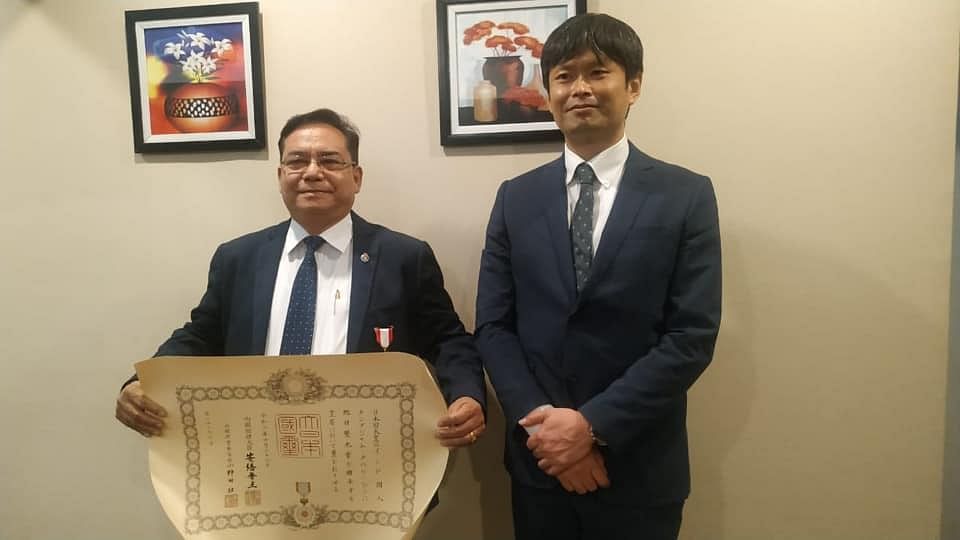 Manipur, Feb 17: Japan has conferred the Order of the Rising Sun, Gold and Silver Rays decoration on Manipur doctor and former president of state tourism forum, Dr Thangjam Dhabali Singh, to honour his contribution to strengthening ties between Japan and India, and Japan and Manipur. He was honoured in a simple event in Imphal on Tuesday.

Dr Singh, who is also the chairman and managing director of Classic Hotels and Resorts and Babina Diagnostics, was honoured by Japanese embassy counsellor Kajita Takuma in a simple event held in Imphal on Tuesday.

“We appreciate that Dr Singh has earnestly dedicated himself to deepening the bonds between Japan and Manipur. During his tenure from 2012 to 2017 as president of Manipur Tourism Forum (MTF), Japan and Manipur rediscovered each other and got even closer, going beyond our historical ties,” said a statement from Japanese ambassador Suzuki Satoshi, read out by Japanese embassy counselor Kajita Takuma.

While stating that the recognition comes with his enduring contribution to promoting the mutual understanding and friendship between Japan and India, Japanese ambassador Satoshi Suzuki said that Dr Singh recognised the importance of passing down the history and nurturing a future-oriented relationship.

Another symbolic achievement of Dr Singh is his contribution to building the Imphal Peace Museum.

The Museum, which opened in June 2019 could not have materialised without his leadership and support, it said.

The decoration was constituted by Japanese Emperor Meiji in 1875.

It is one of the highest orders conferred in the name of his majesty the emperor, by the government of Japan to non-military and apolitical persons, who have made distinguished achievements in international relations, promotion of Japanese culture, achievements in their respective field, development in welfare or preservation of the environment.

“Words truly fail to express how humbled I feel for the acknowledgement of what I still consider to be a small contribution. I know I still have much to learn but with the continued support and encouragement from my fellow colleagues from MTF and ICF, I am sure we will be able to explore more areas to strengthen our friendship with Japan,” Dr Dhabali said after receiving the honour.

Manipur doctor Thangjam Dhabali Singh is among the three Indians and 114 nationals from 57 countries and regions to have been conferred with the award.

The award, scheduled for May 2020 at the Imperial Palace in Tokyo, was postponed to unprecedented COVID-19 pandemic.