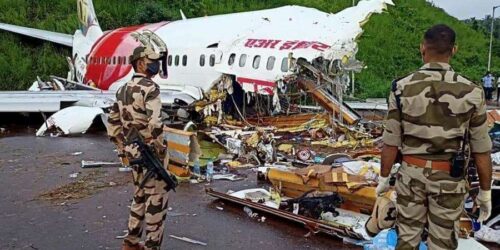 Kozhikode, August 10: After ringing for some time, finally the call was received. A voice from the other side just said “I am fine. A little trouble there has been. That’s it“.

Abhik Biswas, a 24-year-old boy from West Bengal’s Konnagar is a flight attendant of the Air India Express was sitting right at the rear gallery of the aeroplane that crash-landed at the Kozhikode airport, this Friday evening while trying to land on the tabletop runway. After the sudden unexpected jerk, once Abhik regained his senses, he evacuated as many as 35 passengers from the crashed plane.

Carrying about 190 people, Flight IX-1344 skidded off the tabletop runaway at the Calicut International Airport on Friday in heavy rain.

Malappuram District Collector, K Gopalakrishnan on Sunday said that the condition of 14 passengers who were travelling by the plane remained critical. 18 people including the pilot and the co-pilot have lost their lives and 49 people have been discharged from various hospitals in Malappuram and Kozhikode. The remaining 109 people are under treatment at different hospitals. “I thought it was a nightmare. I could see heaps of twisted metal spread around when I opened my eyes after the initial shock of the impact”, said Vijaymohan, a resident of nearby Malaparamba, while recalling his horrific accounts of the incident.

The primary causes of the crash have been cited as poor weather condition and a possible late touchdown. It is feared that if appropriate steps are not taken, accidents as of this may again occur in the near future. In an interview, Mohan Ranganathan, who is a member of a safety advisory committee constituted by the civil aviation ministry, said “The warnings were ignored… in my opinion, it is not an accident but a murder. Their own audits have had flagged safety issues”. He even added that the crash could have been avoided very easily.