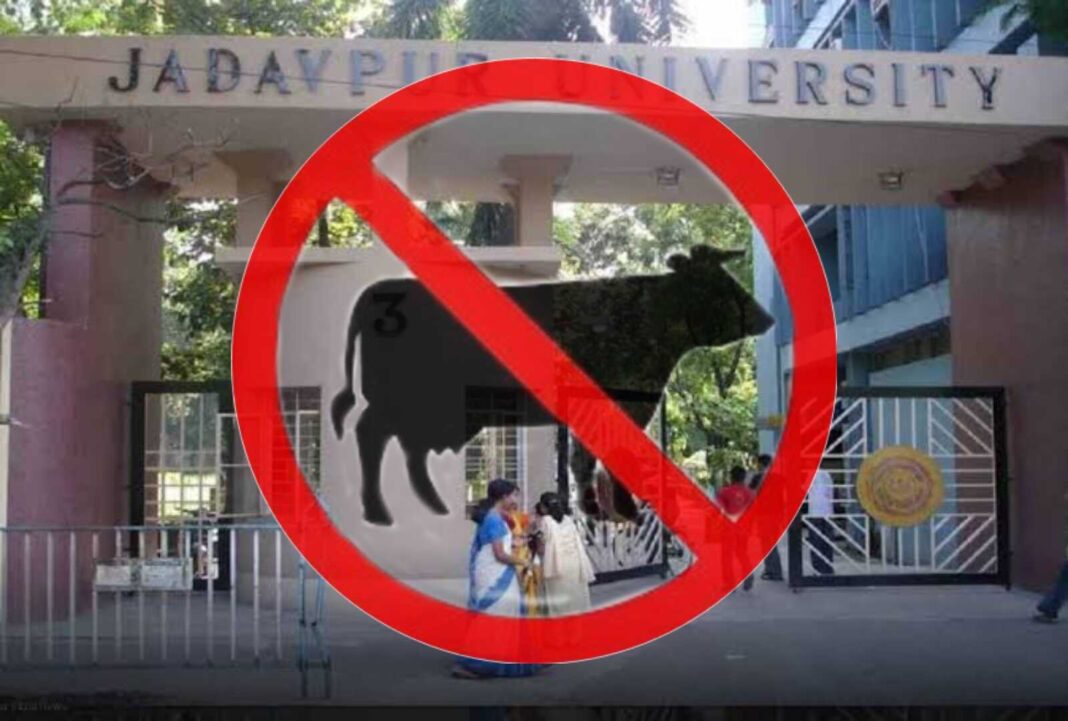 Kolkata, Feb 22: One of the most popular university in Kolkata, Jadavpur University has rejected the proposal of conducting a “Cow Science” examination as given by the University Granted Commission (UGC) recently.

According to the University authority and teachers, the University has always upheld a Scientific form of education since it’s inception. Holding this examination will be a compromise with its eternal philosophy. At a time when COVID 19 has gripped the nation and most universities are suffering from a lack of funds, teachers feel that research should have been conducted in Scientific disciplines well funded by the government, instead, the current exam tries to push a particular unscientific philosophy on the current generation of students.

Data cited Rashtriya Kamdhenu Aayog (the organising body) ask the students to collect the specific materials for the exams which are:

1. The study material mentions that people who had cow dung put on their walls remained unaffected in the Bhopal Gas tragedy.

2. The study material mentions that a particular place where cows have been killed continuously for some years are more prone to earthquakes.

Though about 5 lakh students across many prestigious universities are sitting for this exam the Jadavpur Fraternity request the faculty to take a second view on the unscientific direction this examination will give to the education system of the country.

What is the cow science examination?

The cow science course has been designed by the Rashtriya Kamdhenu Aayog which was set up in 2019 under the Central Animal Husbandry ministry to promote cow welfare and research. The examination was announced on January 5 by the RKA chairman Vallabhai Kathiria and registrations began on January 15. The one-hour online examination which will be conducted across 13 languages aims to revive interest and knowledge about 51 indigenous cow breeds and methods of husbandry. RKA has provided the study material for the examination and it is available on their websites. Following the announcement of the exam, the University Grants Commission reportedly wrote to over 900 colleges and universities, urging them to promote the cow science examination among students.

While many have appreciated the initiative for attempting to revive interest in indigenous cow breeds, critics have slammed RKA, a central government body, for peddling unscientific facts and superstitions. For instance, the study material mentions that those who put cow dung on the walls of their homes remained unaffected by the Bhopal Gas Tragedy. It also mentions that geographical locations where cows were slaughtered became more prone to earthquakes.

When will the cow science exam be held?

While the examinations were initially scheduled to be held on February 25, on Monday that the RKA has postponed the examination. While the postponement came a day after outrage against the upcoming examination, the RKA spokesperson has maintained that the postponement has been caused due to an administrative concern and had nothing to do with the criticism against it. The source said that a new date will be announced in the upcoming week due to the massive interest of students in the course.