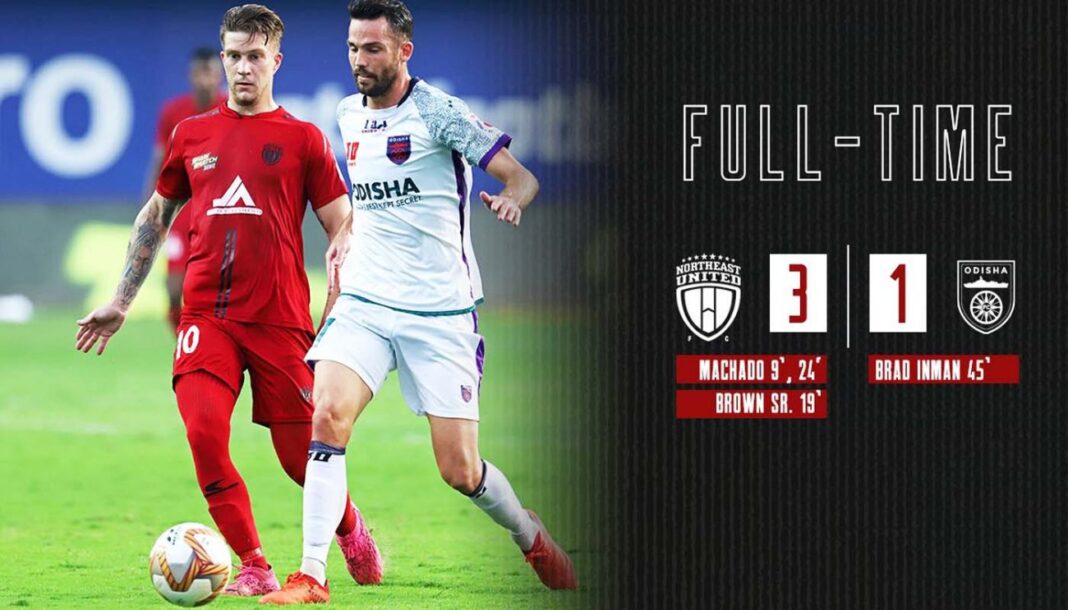 Goals from Luis Machado (9th and 24th) and Deshorn Brown (19th) helped the Highlanders move to third spot and strengthen their chances of qualifying for the play-offs.

Hyderabad FC and FC Goa are currently at the fourth and fifth respectively, taking on each other in their final game, NorthEast are now heavy favourites to grab a play-off spot.

NEUFC took advantage of both their rivals for the top-four spot – FC Goa and Hyderabad FC – dropping points with the convincing 3-1 victory over Odisha FC.

NEUFC opened the scoring in the 9th minute as Ashutosh Mehta found Machado with an accurate cross and the latter hit it first time past a diving Arshdeep Singh. A second goal came ten minutes later through Brown.

Federico Gallego entered the Odisha half with the ball and threaded through a pass for the new recruit, who had been enjoying a fruitful stint since his arrival from Bengaluru FC. The Jamaican slotted home with a sublime finish.

Another five minutes later into this competitve ISL match, NorthEast United FC had their third goal, with Gallego again at the centre of things. He spotted Machado making a run into the box and found him with an accurate looping ball.

Machado made no mistake and headed the ball past the onrushing Arshdeep. There seemed to be no way back for Odisha from there.

But they did manage to get back into the game in stoppage time just before the first-half whistle.

The Odisha FC players kept applying pressure on the Highlanders till the end of the game but the NEUFC with its strong defence won the game.