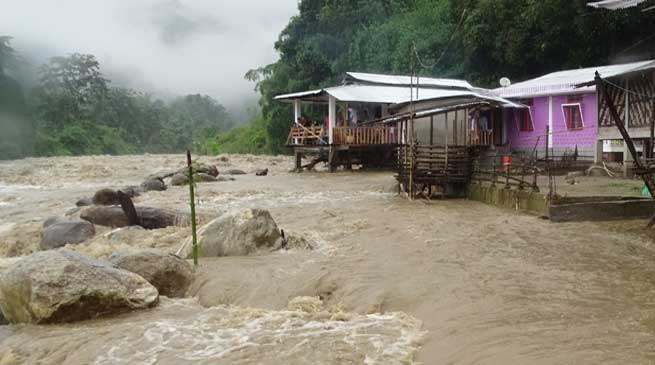 Torrential and Incessant rainfall for the past two days have triggered flash floods from the Poma river in the Arunachal, Itanagar Capital Complex.

National Highways, State and colony roads are all damaged and destroyed due to the flash floods.

Due to the floods, scores of houses have been damaged in Yagamsonallah rendering several people homeless.

A rapid increase in the danger level of the Poma river has left residents living near the river basin in absolute fear.

According to the locals, the river changed its course and diverted towards the colony, submerging most of the residences in the area at midnight on Saturday.

The district administration has assessed the damage and loss of properties in the region due to the floods. Relief camps have been set up for people living in river basins in government schools.

The India Meteorological Department had warned of heavy rainfall in the state. It said in a tweet, “Isolated Extremely heavy falls also very likely over Sub-Himalayan West Bengal & Sikkim and Assam & Meghalaya during 19th- 21st July and over Arunachal Pradesh during 19th-20th July.“

Kamsi added, “The India Meteorological Department has informed that there is going to be heavy rainfall for the coming 2-3 days. This is my request to the people living in landslide zones and besides brooks to shift to their relatives’ house for a few days. Such a warning order has been issued by the Indian Meteorological department.”

Although floods and landslides due to heavy rainfall had been continuing in the state for quite some time, the recent flash floods in Itanagar have become a cause of concern for the people in the region.